The 23-year-old woman who has accused Rajasthan Cabinet Minister Mahesh Joshi's son of rape, suffered an ink attack in the national capital, an official said on Sunday. 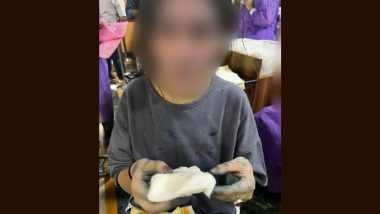 New Delhi, June 12: The 23-year-old woman who has accused Rajasthan Cabinet Minister Mahesh Joshi's son of rape, suffered an ink attack in the national capital, an official said on Sunday.

Deputy Commissioner of Police (Southeast District) Esha Pandey said a PCR call was received on Saturday night that some miscreants had thrown something on the woman and ran away.

After the attack, the woman was immediately rushed to AIIMS Trauma centre.

The victim told the police that she was walking with her mother near Kalindi Kunj Road at around 9.30 p.m. when two boys threw something at her and fled. Delhi: Fire Breaks Out at Electric Motor Parking in Jamia Nagar, Several E-Rickshaws Burnt to Ashes.

Based on her statement, the police registered an FIR under section 195 A (Threatening any person to give false evidence), 506 (Punishment for criminal intimidation), 323 (Punishment for voluntarily causing hurt) and 34 (Acts done by several persons in furtherance of common intention) of the Indian Penal Code at the Shaheen Bagh police station.

Earlier, the victim had lodged a complaint at the Sadar Bazar police station regarding sexual assault by Rohit Joshi, the son of Rajasthan Cabinet Minister Mahesh Joshi.

"She had alleged that Rohit Joshi came in contact with her through Facebook in 2020. He took her to Sawai Madhopur on January 8, 2021, gave her cold drink laced with sedatives and made sexual relationship without her consent," DCP (north) Sagar Singh Kalsi said.

Further allegations of sexual assault in Jaipur and other places have also been made.

Meanwhile, Delhi Commission for Women Chairperson Swati Maliwal said that she will be issuing a notice to the Delhi Police over the ink attack.

Maliwal even asked Rajasthan Chief Minister Ashok Gehlot not to try to save his Minister's son and rather get him arrested.

(The above story first appeared on LatestLY on Jun 12, 2022 11:59 AM IST. For more news and updates on politics, world, sports, entertainment and lifestyle, log on to our website latestly.com).