A constable of the Delhi Police died after he was hit by a car in Vasant Vihar area around 4 am today. The driver of the car, identified as Sumit Yadav, claimed he fell asleep while driving. 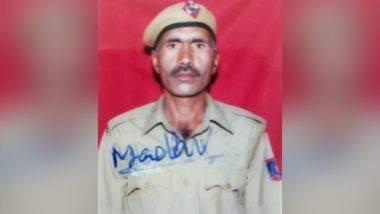 New Delhi, May 1: A constable of the Delhi Police died after he was hit by a car in Vasant Vihar area around 4 am today. The driver of the car, identified as Sumit Yadav, claimed he fell asleep while driving and rammed into a police picket, killing 45-year-old constable Munshilal. Yadav was returning from a hospital in Gururam where his wife is admitted on COVID-19 ward. Delhi Police Head Constable Dies of COVID-19 After Struggling to Find Hospital Bed.

Constable Munshilal was posted at Al-Kauser picket. Around 4 am, a speeding white coloured Honda CRV rammed into the picket, causing damages to police tent and bikes. The vehicle also hit Munshilal and dragged him for 40 metres, said Ingit Pratap Singh, DCP (Southwest). "He was rushed to AIIMS Trauma Center and was treated there but he succumbed to the injuries," the DCP was quoted by The Indian Express as saying. Delhi Police Constable Held After Friend Uses His Service Pistol to Shoot Man Over Road Rage.

A Delhi Police Constable, Munshilal died at AIIMS Trauma Centre where he was admitted today after being hit by a vehicle at Al-kauser picket. The arrested accused says that he had dozed off while driving while returning from hospital where his wife is admitted for COVID treatment pic.twitter.com/toQh5BEosx

Following the incident, police arrested Yadav, a resident of Munrika, from the spot. He told police he had gone to Max Hopsital in Gurugram to attend his wife, who is COVID-19 positive. While returning home, he was tired and dozed off, he said. After his arrest, Yadav was given a PPE kit and was isolated at the Vasant Vihar police station.

A case was registered against Yadav and cops will soon conduct his medical test to ascertain if he was under the influence of alcohol or any other substance. The deceased constable Munshilal was an ex-serviceman and joined the Delhi police in 2010.

(The above story first appeared on LatestLY on May 01, 2021 11:38 AM IST. For more news and updates on politics, world, sports, entertainment and lifestyle, log on to our website latestly.com).