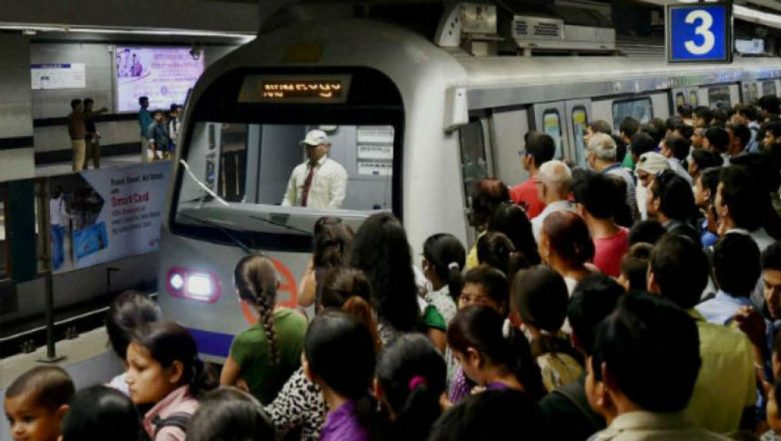 New Delhi, January 10: Passengers in the national capital will now be able to connect with the Delhi Metro on Facebook apart from Twitter! The Delhi Metro Rail Corporation (DMRC) on Wednesday opened its official account on Facebook to reach out to commuters and vice versa. The current operational length of the Delhi Metro is 327 km with 236 stations, with an average daily ridership of about 28 lakh. Delhi Metro All Set to Unveil World’s Smallest Station ‘Ashram’ on Monday.

An official was quoted in a PTI report saying that apart from Twitter, the DMRC now has a Facebook account too. "We already have a Twitter handle and now we are on Facebook too -- www.facebook.com/officialdmrc -- and, soon we want to make a debut on Instagram too. We look forward to valuable feedback from people," he said. Delhi Metro: Pink Line's Lajpat Nagar-Mayur Vihar Stretch to Open on Dec 31.

On 20th December 2019, the DMRC had officially launched an account on Twitter which has nearly 4,300 followers since the launch of the handle.  "Opening new doors! Delhi Metro Rail Corporation is now on Facebook," the DMRC wrote in a post on the social networking site.

On December 31, Union minister Hardeep Singh Puri had inaugurated the 9.7-km Lajpat Nagar-Mayur Vihar Pocket 1 corridor of the Delhi Metro's Pink Line. The corridor directly connects south and east Delhi on the rapid transit network. The new segment is part of the 59-km-long Pink Line, which spans from Majlis Park to Shiv Vihar.