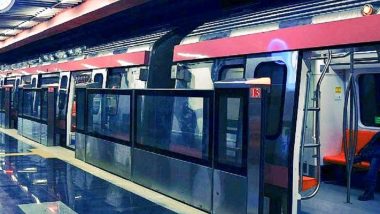 The 8.1-kilometre stretch has six stations which include two interchange stations – INA and Lajpat Nagar. Commuters can change for Yellow line metros at INA, whereas for Violet line they can get down at Lajpat Nagar. The other stations on this line are Sir Vishveshariah Moti Bagh, Bhikhaji Cama Place, Sarojini Nagar and South Extension.

The stretch will be a major advantage for the shoppers of the city as four major markets of the national capital, i.e, Sarojini Nagar, INA, South Extension and Lajpat Nagar will get dedicated Metro stations. With the opening of his section, the Pink Link will be now 29.66 km long, and the total operational length of the Delhi Metro Rail Corporation (DMRC) will reach 296 km connecting 214 stations.

The first corridor of the Pink line from Majlis Park to South Campus was opened on March 14. The corridor is a part of a pink line which will be 58-km-long.

(The above story first appeared on LatestLY on Aug 06, 2018 10:17 AM IST. For more news and updates on politics, world, sports, entertainment and lifestyle, log on to our website latestly.com).