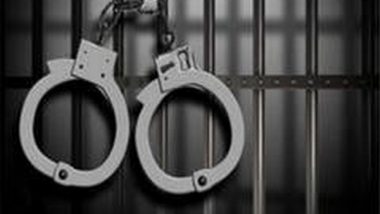 Delhi, December 25: A 22-year-old man was allegedly abducted and beaten up by his wife’s family members, who had objections to their relationship and wedding. Police have registered an FIR and two women have been arrested so far. Efforts are on to nab the remaining accused. Two policemen have also been suspended for a delay in filing the FIR. Gujarat Man Beaten to Death, Head Smashed With Stone by Wife's Relatives Over Love Marriage

The victim, a resident of Rajouri Garden, has known the woman for the last three years. The couple eloped and got married on December 21, according to the police.

The victim said his wife’s family had objected to their relationship from the start and had allegedly threatened him several times, according to a report in The Indian Express.

The victim said that he had gone to the police station to file a complaint on Wednesday because of the threats from his wife’s family who always had a problem with them. As soon as he came out of the station, 15 people surrounded him,abducted him and took him to their house in Sagarpur, where he was assaulted mercilessly. He is currently receiving treatment at AIIMS Trauma Centre.

According to police, the woman’s family members were “furious” after they came to know about the wedding as the couple are from the same community.

Police said the couple were “forcibly taken” to Sagarpur, where the man was beaten up. The victim was eventually found by his elder brother, who took him to the hospital.

“My brother has many injuries, including to his private parts. We demand justice and have faith in the police…,” said the victim’s brother. The couple are currently unemployed.

Police have arrested the woman’s grandmother, who has 65 cases against her, including extortion and loot, and an aunt.

We found lapses on part of our staff and suspended two personnel — an assistant sub-inspector and a head constable,” an officer said.

(The above story first appeared on LatestLY on Dec 25, 2021 10:33 AM IST. For more news and updates on politics, world, sports, entertainment and lifestyle, log on to our website latestly.com).