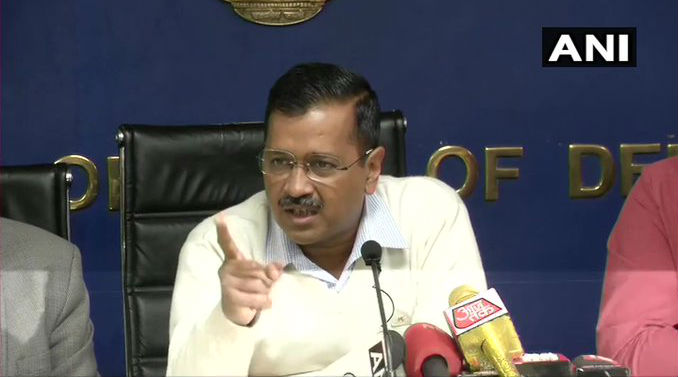 New Delhi, February 27: Announcing Rs 10 lakh each as compensation to the families of those killed in violence in northeast Delhi, Chief Minister Arvind Kejriwal on Thursday asserted that any AAP member found guilty of involvement should get double the punishment prescribed in law. The Chief Minister appealed that no politics should however be done over the issue of national security.

Asked about charges of involvement in violence and arson in northeast Delhi against AAP councillor Tahir Hussain, Kejriwal said: "Any person found guilty should be given strict punishment. If any Aam Aadmi Party member is found guilty, he or she should be given double the punishment." Delhi Violence: Death Toll Rises to 28, Heavy Security Deployed in North East District.

Earlier in the day, BJP leader Kapil Mishra had demanded a scrutiny of the call details of Tahir Hussain whereas BJP MP Gautam Gambhir claimed that the Chief Minister's "silence is deafening".

Unverified video clips have gone viral on the social media, wherein a man reported to be Tahir is seen holding a stick, after which both Mishra and the BJP upped the ante against the AAP. This comes a day after the AAP press conference to question Union Home Minister Amit Shah on the violence.

Kejriwal announced Rs 10 lakh compensation for the kin of those who died in the riots. He also announced the widening of the ambit of the 'Farishte' scheme, whereby anyone affected by the violence can also avail of free treatment at any private hospital.

Those seriously hurt will get Rs 5 lakh each. He also announced compensation for damage to property and possessions like rickshaws. Kejriwal said that an app would be rolled out for filing of compensation claims by the affected.

Those who lost their homes will be accommodated at Rain Baseras (night shelters) till their houses are rebuilt, said the Chief Minister. He also said his government will provide food in riot-affected areas, in view of curfew imposed in some areas. Delhi HC Directs Police to Probe Speeches of BJP Leaders Kapil Mishra, Parvesh Verma, Abhay Verma, Anurag Thakur and Decide on Filing FIR.

Violence in northeast Delhi was triggered on Sunday afternoon after a face-off between pro- and anti-CAA groups, leading to the death of at least 36 persons, including a police official and an IB staffer. Over 200 persons were injured.