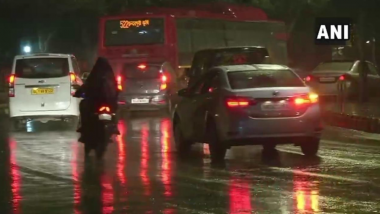 New Delhi, February 25: As the parts of Delhi received rainfall on Monday afternoon, nine flights were diverted from Delhi to Jaipur airport and two were diverted to Lucknow airport, reported news agency ANI. The report also added that the diversions were due to overhead congestion. The weather department had predicted light rainfall and thunder in the afternoon and evening today. Travel Tip of The Week: 5 Ways to Survive Long-Haul Flights.

Delhi and its nearby regions Noida, Gurgaon, Ghaziabad and Faridabad received light rainfall on Monday evening making February 2019 the wettest month since 2014. According to the IMD (India Meteorological Department), Thunderstorms are likely to intensify in Delhi in the coming days. WATCH VIRAL VIDEO: Drunk Passenger Kicked Out of Flight for Spitting on Child, Because She Didn’t Want to Sit Next to a ‘F*****g 3-Year-Old’.

Meanwhile, it was a cold morning in Delhi today. The minimum temperature was recorded at 9.2 degrees Celsius, which is three degrees below the season's average. It is expected that on February 26, Delhi will receive shower or thunderstorm in the afternoon and the minimum temperature is predicted to be 12-degree Celsius.

(The above story first appeared on LatestLY on Feb 25, 2019 07:41 PM IST. For more news and updates on politics, world, sports, entertainment and lifestyle, log on to our website latestly.com).