WATCH VIRAL VIDEO: Drunk Passenger Kicked Out of Flight for Spitting on Child, Because She Didn’t Want to Sit Next to a ‘F*****g 3-Year-Old’ 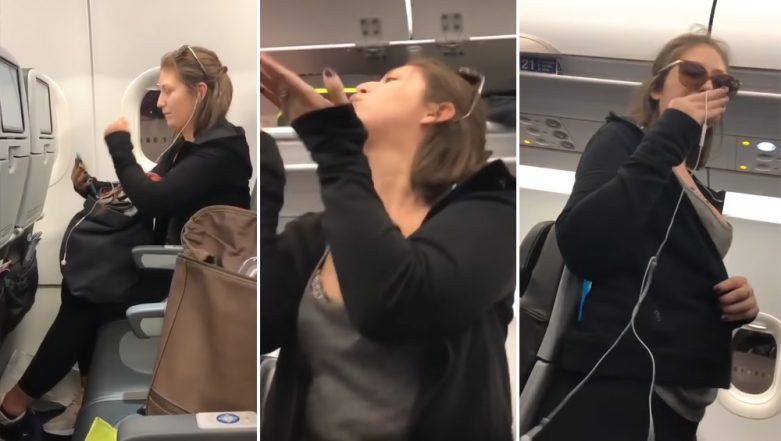 Miscreants creating a scene on flights seem to have become a very common occurrence these days. We just saw a woman calling out two fellow passengers for their weight, and now we have a drunk woman who was kicked off a Las Vegas flight for her obnoxiously rude. The woman refused to sit next to a "f***ing three-year-old" and not only that she went ahead to spit at passengers as well. This incident occurred in JetBlue flight from Fort Lauderdale, Florida when the 32-year-old, named Valerie Gonzalez began her tantrums on board. As soon as she realised that she was sitting next to a child, she immediately burst into a rage and began using profanity as per reports by The Sun. "I’m not sitting next to a f***ing three-year-old, I’ve been drinking all day," she said and then got up out of her seat and sat in another seat obviously not assigned to her. ‘Two Big Pigs!’ Woman’s Fat Shaming Comments for Co-Passengers Get Her Kicked off United Airlines (Watch Video.)

Even after that, she was dissatisfied with the passenger in front of her non-assigned seats and kept blurting out cuss words. Soon her tantrums turned into a rage once she caught another passenger shooting a video of her using filthy words. She then shouted at the passenger: "Oh, you wanna tape me? Make, this viral, b**ch a**!" She didn't even stop there and is seen in the video, spitting at the passenger in front of her. The 32-year-old then screamed: "Make this viral! You wanna make this viral, make it viral. What the f**k did I do? I called someone old cause they were? Alright, I’ll get my bags. I’ll take my f***ing sh*t. F**k all ya’ll."

Here's the video of Valerie Gonzalez creating a ruckus in a JetBlue flight:

Gonzalez was thrown out of the plan as soon as the cabin crew witnessed it. As per reports by CBS Miami, she was put in a wheelchair and rolled out of the terminal.