The Chief Minister further informed at the State Assembly that 3,000 doctors and 4,000 nurses were working to control the disease, with the government spending Rs 475 crore. 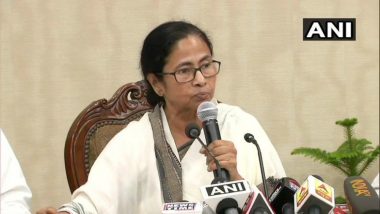 Kolkata, December 4: There has been a tremendous rise in dengue cases and the city is fighting to tackle the menace. Chief Minister Mamata Banerjee asked the opposition to stop doing politics over dengue and instead arrive at the same platform in order to tackle the deadly disease. Atleast least 27 people have died, and around 44,000 people have been afflicted with dengue in West Bengal this year, Chief Minister Mamata Banerjee told the state Assembly on Tuesday.

The Chief Minister's reply comes after the Left Front and Congress members attacked the government for the spread of the disease and walked out of the house before the Chief Minister, who also holds the health portfolio, could reply. According to an IANS report, "If you have asked questions, why won't you hear to our replies," a peeved Banerjee said while responding to the opposition. Dengue Outbreak in West Bengal Leaves 27 Dead, 44,000 Affected.

The Chief Minister further informed at the State Assembly that 3,000 doctors and 4,000 nurses were working to control the disease, with the government spending Rs 475 crore. Last month, BJP workers held a protest near Kolkata Municipal Corporation office demanding a 'dengue free' Kolkata among other demands. Police had to use water cannons to disperse the protesters after it went violent.

(The above story first appeared on LatestLY on Dec 04, 2019 02:25 PM IST. For more news and updates on politics, world, sports, entertainment and lifestyle, log on to our website latestly.com).