Hearing series of the petition on 10% EWS quota for general category, Supreme Court maintained that they would look into the matter and examine it. 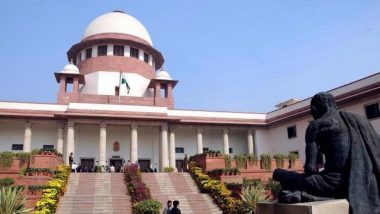 New Delhi, January 25: The Supreme Court on Thursday refused to stay the implementation of 10% reservation to the economically weaker section of the general category. The bench – headed by the Chief Justice of India Ranjan Gogoi – while hearing the petitions against EWS reservations maintained that they would look into the matter and examine it.

The apex court made the observation on the 10 percent quota to EWS category after series of petitions were filed against it, raising questions on its implementation. The bench also issued a notice to the Union government, led by Prime Minister Narendra Modi. With the current EWS passed in both the Lok Sabha and Rajya Sabha, President Ram Nath Kovind gave his nod to the Bill. After the nod, five states have implemented the reservation bill, while several others are mulling over it. Himachal Pradesh Becomes 4th State to Approve 10% Quota for Economically Weaker Section in Upper Castes.

Earlier on January 18, the apex court stated that it would hear all the petitions filed challenging the bill to provide 10 per cent reservation in jobs and education for the economically weaker section. In the plea filed by one organisation Youth for Equality, sought a stay on the constitutional amendment and had also requested to quash the bill. It had stated that the bill would violate the “equality code of the Constitution” as a reservation on economic grounds can’t be restricted to general category. Also, the petition says 50 per cent ceiling limit cannot be breached.

According to the 10% reservation granted to the general category of EWS, a person with less than Rs eight lakh annual income can apply for jobs and education in the public sector. Along with Hindus, this bill also, gives leverage to other communities of the country. After its implementation, the quota in the jobs and education sector crossed the set limit of 49.5% and reached 59.5%.

(The above story first appeared on LatestLY on Jan 25, 2019 11:56 AM IST. For more news and updates on politics, world, sports, entertainment and lifestyle, log on to our website latestly.com).