Veterinarians have removed 71 kilogram of plastic waste and other non-biodegradable items like needles, coins, pieces of glass, screws and pins from stomach of a stray cow. 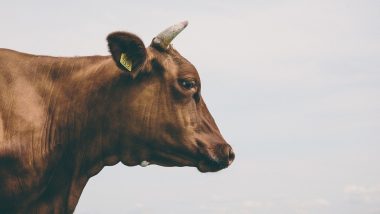 Faridabad, February 25: Veterinarians have removed 71 kilogram of plastic waste and other non-biodegradable items like needles, coins, pieces of glass, screws and pins from stomach of a stray cow during surgery in Faridabad. According to a report, the stray cow had received injuries after a car hit it in NIT-5 area. The domestic animal was brought at Devashray Animal Hospital for treatment. Uttar Pradesh CM Yogi Adityanath To Involve Local People in Upkeep of Cows.

Veterinarians observed that the cow had been kicking its own stomach, an indication that it was in pain. They conducted a few tests, an X-ray and an ultrasound that confirmed the presence of harmful substances inside the animal's stomach, the report said. Subsequently, a surgery was performed to remove the harmful substances. Raigad: Cow Stabbed by Fruit Vendor for Gulping Papaya from Cart, Accused Arrested.

Dr Atul Maurya, who was part of the three-member team that performed the surgery on the seven-year-old animal, told TOI it took nearly four hours to clean the four chambers of stomach. Although the operation was successful, the cow is not out of danger yet. "The next 10 days are going to be very critical," Dr Maurya added.

"The digestive system of a ruminant is complex. If a foreign substance stays in it for a long time, it sticks to the stomach. This might lead to air getting accumulated. In that case, an animal might fall or start kicking its belly. Such surgeries have been conducted before. But 71 kg of waste inside the stomach of an animal is alarming," the vet was further quoted as saying. Haryana was among the first states in the country to ban manufacture and use of plastic bags in 2011.

(The above story first appeared on LatestLY on Feb 25, 2021 02:09 PM IST. For more news and updates on politics, world, sports, entertainment and lifestyle, log on to our website latestly.com).