Thousands of farmers from Punjab, Haryana and several other states have been protesting on various borders of Delhi since November last year, seeking a repeal of three farm laws enacted last September. 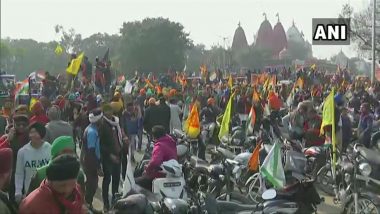 New Delhi, April 21: Farmers protesting at several Delhi borders Wednesday rejected as "false propaganda" allegations that they were not letting medical oxygen carriers into Delhi, thus putting lives of several COVID-19 patients at risk. BJP MP Parvesh Verma had Tuesday night alleged that transportation of medical use oxygen into Delhi was hampered due to the road blockade caused by protesters.

The Samyukta Kisan Morcha, a representative body of several protesting farmer unions, said on Wednesday they have kept a way open for emergency services since day one of their agitation.

"Not a single ambulance or essential goods service has been stopped. It is the government that has put strong and multilayer barricades (nails), not the farmers. Farmers are fighting for human rights and they support every human's rights," the morcha said. Farmers Protest: Agitation Farmers to Be Tested, Vaccinated Against COVID-19 in Haryana, Says Anil Vij.

"A false propaganda is being spread against farmers that they have blocked the roads and not letting oxygen into Delhi. This is completely false news. Yes, we are protesting but not against COVID-19 patients, corona warriors or common citizens. We are against the government's discriminatory policy on agriculture," it added.

Thousands of farmers from Punjab, Haryana and several other states have been protesting on various borders of Delhi since November last year, seeking a repeal of three farm laws enacted last September.

Making the allegations, Verma had tweeted last night, "I spoke to hospitals. I was told that only few hours of oxygen supply is left and due to road blockade by protesters at Ghazipur border, the transportation of oxygen is getting difficult. The protesters must open the road," he had tweeted.

Chief Minister Arvind Kejriwal had on Tuesday urged the Centre "with folded hands" to provide medical oxygen to Delhi. His deputy Manish Sisodia had said there will be chaos in the city if the stocks are not replenished by Wednesday morning. Delhi Health Minister Satyendar Jain had also sent an SOS to Union minister Piyush Goyal at 10:20 pm, saying "oxygen at GTB Hospital may not last beyond 4 hours".

Some major government and private hospitals in Delhi received fresh stock of medical oxygen in the early hours of Wednesday, averting a crisis just in time, according to officials.

A record 28,395 coronavirus cases and 277 deaths marked the aggravation of the pandemic situation in Delhi on Tuesday as the positivity rate shot up to 32.82 per cent -- meaning every third sample came out positive -- amid a "serious oxygen crisis" unfolding in the city.