Police had earlier registered an FIR against the neighbour because the girl's body was found in his toilet on March 29. According to police, the girl had gone missing sometime during the evening on the day of the incident. 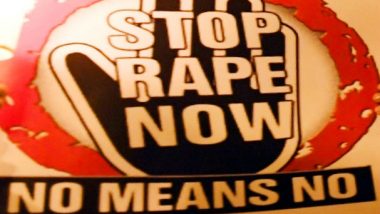 Bareilly, April 16: In a shocking incident, a father raped and killed his 8-year-old daughter because he suspected his wife of cheating on him and believed that the daughter was born from her illicit relationship.

Police had earlier registered an FIR against the neighbour because the girl's body was found in his toilet on March 29. According to police, the girl had gone missing sometime during the evening on the day of the incident.

Later in the night, her body was recovered from a toilet, and the girl's father had lodged a complaint against a local youth. Delhi Girl, 19, Raped by Boxing Coach in Train Enroute Kolkata; Sexually Assaulted Again at Their Accommodation.

Station House Officer, Fatehganj West, Chandra Kiran said that though he had detained the accused and sent him to jail, he was not convinced that he had committed the murder because he was sleeping inside his house when he was caught.

The investigations continued even after the youth was arrested and the police found out that the girl's father often used to quarrel with his wife, and ill-treat the daughter.

The father also changed his statement during investigations. The girl's mother also expressed suspicion about her husband. It further emerged the father had also borrowed money on interest from the arrested youth, giving credence to a financial motivation behind his naming as the accused.

Finally, forensic evidence collected from the spot and the girl's body also indicated the father's involvement in the crime. The accused father was arrested and sent to jail on Wednesday after he was produced before a magistrate.

Additional SP (rural) Sansaar Singh said, "When we started the investigation, the girl's mother had indicated that her husband could have had committed the murder. A day after we questioned him for the second time, he changed his statement and then went absconding. He was caught on Tuesday, when he confessed to have raped and killed his daughter, as he suspected she was a result of his wife's illicit relationship with another man."

The ASP said that the youth who was earlier booked will now be acquitted.

(The above story first appeared on LatestLY on Apr 16, 2020 10:02 AM IST. For more news and updates on politics, world, sports, entertainment and lifestyle, log on to our website latestly.com).