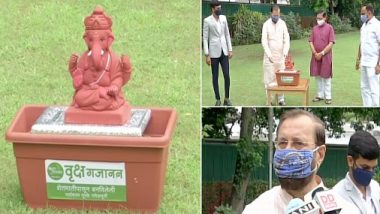 New Delhi, August 14: The Delhi branch of a Maharashtra based organisation, Vruksha Gajanan, presented Union Minister Prakash Javadekar an earthen Ganesh idol on Friday. According to a tweet by ANI, Javadekar lauded the efforts of the organisation and said earthen Ganesh idols are environment friendly and can be disposed without any harm to the environment. "Idols are usually made of PoP but Pollution Control Board banned its usage in such activities. Earthen idols can be disposed without pollution", the Minister said. When is Ganesh Chaturthi in 2020? Know The Beginning Date of The 10-Day Festival of Ganeshotsav In Maharashtra This Year.

In a bid to ensure idol immersion in an eco-friendly manner in the country, the Central Pollution Control Board (CPCB) had banned the use of plastic, thermocol and plaster of Paris in making idols of gods and goddesses. In its order in May 2020, the CPCB had revised its 2010 guidelines on idol immersion especially emphasising use of naturally occurring clay, colours in place of synthetic paints and chemicals for colouring idols.

Minister says, "Idols are usually made of PoP but Pollution Control Board banned its usage in such activities. Earthen idols can be disposed without pollution" pic.twitter.com/fl04Sy1dV7

The decision was taken due to the rising water pollution across the country which worsens with each passing year. Every year, water bodies get highly polluted after idol immersion during festivals. This is because the idols are made up of inorganic and toxic material instead of traditional eco-friendly mud and clay.

The CPCB in its order had said that idols made up of only natural, bio-degradable, eco-friendly raw material without any toxic, inorganic raw material such as traditional virtuous clay and mud as well as free from plaster of Paris, plastic and thermocol (polystyrene) should be encouraged, allowed and promoted, and idols made up of plaster of Paris (PoP) shall be banned.

(The above story first appeared on LatestLY on Aug 14, 2020 02:58 PM IST. For more news and updates on politics, world, sports, entertainment and lifestyle, log on to our website latestly.com).