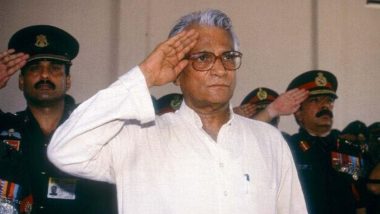 New Delhi, June 3:  On the occasion of George Fernandes birth anniversary today, politicians have paid their heartfelt tributes to the great political leader. From Dr Harsh Vardhan, Suresh Prabhu to other leaders, they have remembered Fernandes' contribution as India's former Defence Minister.

Fernandes served the nation between the year 1998 and 2004. George Fernandes, the senior Janata Dal leader before he founded the Samata Party, was one of the most prominent leaders from the socialist movement in the 1970s. During the Atal Bihari Vajpayee-led BJP government, Fernandes served the defence ministry primarily but also help several other departments such as industry, railways and communications. George Fernandes Dies After Long Battle With Alzheimer’s Disease: Top Facts About This Degenerative Illness.

My heartfelt tributes to one of the most charismatic leaders & a great statesman!

Tributes to the former Defence Minister of India Shri #GeorgeFernandes on his birth anniversary. pic.twitter.com/YPQERe0xZ8

My heartfelt tributes to Geroge Fernades ji on his jayanti.

He will be remembered not just as a socialist or leader of trade union, but, also as a charismatic leader & a great statesman.

Last year Fernandes died at the age of 88 after suffering from a neurodegenerative disorder, Alzheimer's. He was also affected by the H1N1 virus or also called Swine Flu at the time of his death. LatestLY pays tribute to the great leader on his birth anniversary.

(The above story first appeared on LatestLY on Jun 03, 2020 01:35 PM IST. For more news and updates on politics, world, sports, entertainment and lifestyle, log on to our website latestly.com).