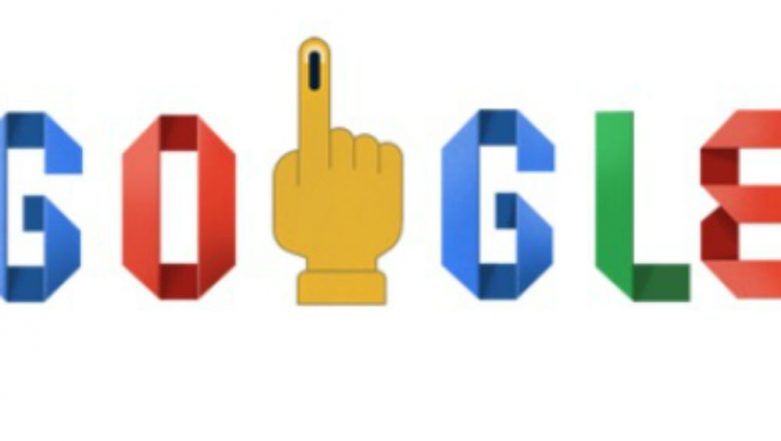 New Delhi, May 12: The polling for Phase 6 of Lok Sabha Elections are going to begin in some hours and Google has yet again shared an informative doodle on its landing page on Sunday. Through its doodle, Google has tried to enlighten the electorates about the poll procedure for 59 Lok Sabha seats where 979 candidates are testing their fate in seven states.

According to the ECI, over 10 crore voters would decide the fate of candidate in over 1 lakh 13 thousand polling stations. The polling will take place in Bihar (8), Haryana (10), Jharkhand (4), Madhya Pradesh (8), Uttar Pradesh (14), West Bengal (8) and Delhi (7). Along with the 59 seats, polling will also take place in 168 stations in West Tripura Lok Sabha seat. Lok Sabha Elections 2019 Phase 6 Voting: Which Constituencies Are Going to Polls Tomorrow?

Here are some of the key FAQs answered related to polls.

You can only vote if your name appears in the Voter List (also known as the electoral roll). Verify your name on the list by either:

Lok Sabha Elections 2019: Key Candidates and Contests to Watch Out in Phase 6 of Polls

How to use EVM (VVPAT)

• Second polling official will ink your finger, give you a slip and take your signature on a register (Form 17A)

• Record your vote by pressing the ballot button opposite the symbol of the candidate of your choice on the Electronic Voting Machine (EVM); You will hear a beep sound

• Check the slip that appears in the transparent window of the VVPAT machine. The slip with the Candidate serial No., Name and Symbol shall be visible for 7 seconds before it drops in the sealed VVPAT box

• You can press NOTA, None of the Above, if you don't like any candidate; it's the last button on the EVM

• For more information, please see the Voter Guide on http://ecisveep.nic.in/

• Mobile phones, cameras or any other gadget is not allowed inside a polling booth.

Voters can visit Candidate Affidavit Portal (click here) or download the Voter Helpline App (click here) to see the list of candidates. Please note this data is updated as affidavits are filed by candidates.

Find Polling booth (Where to Vote)

• Voters can go to electoralsearch.in or use Voter Helpline App to find their polling booth

• Voters can call the Voter Helpline, the number is 1950 (please add your STD code before dialling)

Voters can carry any of the below mentioned recognized ID cards for polling, Photo Voter Slip shall not be accepted as a stand-alone identification document for voting.

• Pension document with a photograph

When is the Election (Election dates)?

Lok Sabha elections are scheduled from 11 Apr – 23 May, 2019. Please visit electoralsearch.in to check your exact date.

According to the Election Commission website, the counting of votes will begin on May 23. Along with the Lok Sabha elections, the polling for Assembly seats in Andhra Pradesh, Arunachal Pradesh, Odisha and Sikkim Vidhan Sabha elections were concluded parallel with Lok Sabha polls. Please check eci.gov.in for more information.