Gujarat: 8 Dead After Fire Breaks Out at COVID-19 Designated Shrey Hospital in Ahmedabad 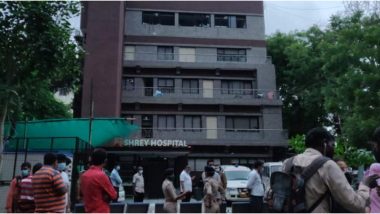 Ahmedabad, August 7: A fire broke out at Shrey hospital in Gujarat's Ahmedabad on Wednesday morning. In the incident, at least eight people have reportedly died, says news agency PTI quoting an official. Fire fighting engines reached the spot and have doused the fire.

According to reports, the fire broke out at the fourth floor of the hospital located in Ahmedabad's Navrangpura area. Meanwhile, the hospital administration has reportedly been shifted to other hospitals. The cause of the fire is not known yet. Mumbai: Fire Breaks Out at HN Reliance Foundation Hospital in Grant Road; 6 Fire Tenders Rushed to Spot.

Reports also arrived that broke out at the Intensive Care Unit (ICU) of the hospital, which has been controlled by fire fighting officials. Shrey hospital in Gujarat's Ahmedabad is a COVID-19 hospital. Principal Health Secretary Jayanti Ravi has assured an unbiased probe, while Ahmedabad police have launched their investigation to know the reason behind the fire.

(The above story first appeared on LatestLY on Aug 06, 2020 08:16 AM IST. For more news and updates on politics, world, sports, entertainment and lifestyle, log on to our website latestly.com).