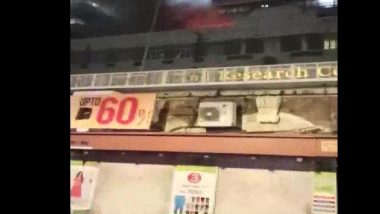 Mumbai, August 1: A fire broke out at HN Reliance Foundation Hospital in Mumbai’s Grant Road on Friday night. According to reports, around six fire tenders have rushed to the spot. Till now, there are no reports of any injuries due to the blaze. The reason of the fire is yet to be ascertained. Fire-fighting operations are currently underway. Mumbai Fire: Blaze Breaks Out at a Bank in Nariman Point.

The reason of the fire is yet to be ascertained. Soon after the blaze broke out at the hospital, a video of the incident surfaced on social media. In the video, flames of fire were seen coming out of one of the floors of the hospital, prompting authorities to take a stock of the situation. More details are still awaited.

Video of the Fire at HN Reliance Foundation Hospital:

Earlier in July, a massive fire broke out at a shopping centre in Borivali West area of the city. As soon as the blaze was reported, a total of 14 fire tenders were rushed at the spot.  No casualty was reported in the blaze at Borivali.

(The above story first appeared on LatestLY on Aug 01, 2020 12:39 AM IST. For more news and updates on politics, world, sports, entertainment and lifestyle, log on to our website latestly.com).