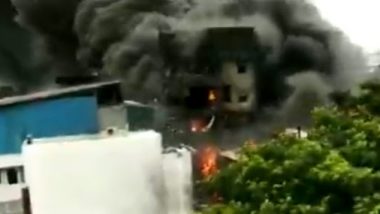 Ahmedabad, August 8: A massive fire was reported from a chemical factory in Gujarat on Saturday. According to a tweet by ANI, the blaze broke out at a chemical factory in Vapi area of Valsad. Reports inform taht more than 8 fire tenders are at the spot. In visuals, a long plume of black smoke is seen rising from the chemical plant.  No reports of casualty or damage to property has been reported from the fire incident. The cause of the fire is yet to be ascertained.

In June, a similar fire was reported at a chemical factory in Bharuch district of Gujarat. In the fire mishap, at least 40 workers of the unit were injured. The Bharuch district collector had informed that the massive blaze was caused by a blast in the boiler at Dahej. "Around 35-40 workers sustained burn injuries after the boiler of an agro-chemical company exploded", said Bharuch collector MD Modia. Pune Fire: Massive Blaze Engulfs Chemical Factory in Kurkumbh MIDC Area.

#WATCH Gujarat: Fire breaks out at a chemical factory in Vapi, Valsad. More than 8 fire tenders are at the spot. More details awaited. pic.twitter.com/ELsVSD2x1W

In May, a similar incident was reported from Andhra Pradesh's Visakhapatnam district where a chemical leak was reported in a plant of LG Polymers India. The leak was so severe that it led to death of 11 people and hospitalisation of about 200. Reports inform that 1,000 more people were affected by the gas leak from the plant that was left idle because of the coronavirus lockdown.

(The above story first appeared on LatestLY on Aug 08, 2020 02:33 PM IST. For more news and updates on politics, world, sports, entertainment and lifestyle, log on to our website latestly.com).