Gujarat Shocker: 30-Year-Old Man Kills Wife Over His Love For Her Sister in Rajkot; Arrested

A 30-year-old man was arrested on Tuesday for murdering his wife and burying her body on the outskirts Dadali village in Vichiya taluka of Rajkot district in May. 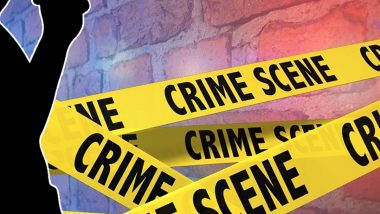 Rajkot, July 7: A 30-year-old man was arrested on Tuesday for murdering his wife and burying her body on the outskirts Dadali village in Vichiya taluka of Rajkot district in May. The incident came to light after the deceased woman's family sat on dharna at the mamlatdar's office demanding the arrest of the accused Rajesh Orakhiya.

Police said that Rajesh strangled his wife Ranjan, who was suffering from AIDS, as he was having an affair with his sister-in-law and wanted to marry her, reported Times of India. According to police, Rajesh had married Ranjan six years ago and they have a son. Last year Ranjan was diagnosed with AIDS. Delhi Shocker: Man Kills 30-Year-Old Wife Over Extramarital Affair in Rohini

Thereafter, Rajesh developed a relationship with Ranjan's younger sister Indu. Rajesh and Indu had eloped nine months ago. When they returned, Ranjan went to live with her parents.

However, Rajesh somehow convinced Ranjan to come back. She came back to her house last month. After she returned, Rajesh strangled Ranjan with a mobile phone charger's wire and buried her body on the outskirts of the village.

He then told police that Ranjan had left home with gold jewellery. However, father of the deceased insisted that his daughter was murdered by Rajesh. Only after Ranjan's father and kin sat on dharna outside mamlatdar's office on Tuesday that police detained Rajesh and questioned him and he confessed.

(The above story first appeared on LatestLY on Jul 07, 2022 04:25 PM IST. For more news and updates on politics, world, sports, entertainment and lifestyle, log on to our website latestly.com).