Each year the CBDT notifies the ITR forms sometime in April, but this time it has notified two ITR forms -- ITR 1 and ITR 4 -- in the first week of January 2020. Here are all details about five new disclosures. 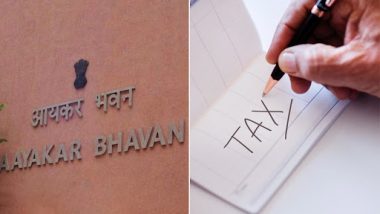 Mumbai, January 6: Each year the Central Board of Direct Taxes (CBDT) notifies the Income Tax Return (ITR) forms sometime in April, but this time it has notified two ITR forms in the first week of January 2020. The CBDT has notified two ITR Forms for AY 2020-21 -- ITR-1 Sahaj and ITR-4 Sugam. Through this two forms, taxpayers get new disclosures and information which they may make declarations while filing their tax return.

Generally, the ITR has be filed each year by July 31 for the Assessment Year, a year ahead of Financial Year. This year too, the last date of filing ITR has been scheduled to July 31, 2020, which may be extended by the Income Tax Department, if required be. Experts opine that this year, the ITR forms for ITR-2 and ITR-3 would be released simultaneously. Aadhaar-PAN Linking Deadline Extended Till March 31, 2020 by Income Tax Department.

Here are five new disclosures that IT department is seeking in these two forms:

2) Passport: A taxpayer needs to disclose the Passport number, both to be furnished in ITR 1-Sahaj and ITR 4-Sugam.

3) Cash Deposit: For taxpayers filing ITR 4-Sugam, declaration of amount deposited as cash in a bank account has been made mandatory, if amount exceeds Rs 1 crore during the FY 19-20.

4) Foreign Travel: Taxpayers spending more than Rs 2 lakh on travelling abroad during the FY 19-20, have to disclose the actual amount spent

5) Electric Consumption: For those whose electricity bills have been more than Rs 1 lakh in aggregate during the FY, have to disclose the actual amount.

What is ITR-1 and who can file it?

Who can file ITR 1 Sahaj?

No individuals or directors in a company come under this slab. They don't have to furnish return under 7th provision to section 139(1) of the Income Tax Act.

Who can file ITR 4-Sugam?

This is for the individuals, HUfs and institutions with a total income up to Rs 50 lakh. Also the individuals possessing a house, and an income from business and profession upto Rs 5,000.

According to the new rule, this form is not for individuals who is director in a firm.

(The above story first appeared on LatestLY on Jan 06, 2020 05:44 PM IST. For more news and updates on politics, world, sports, entertainment and lifestyle, log on to our website latestly.com).