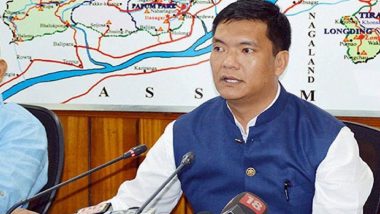 Addressing a small gathering on Independence Day at IG Park in Itanagar, the Chief Minister said the state is taking appropriate steps to contain the COVID-19 pandemic. Arunachal was among the first few states in the country to follow the mandatory institutional quarantine and do the RT-PCR test on all the people who returned to the state from different parts of the country, he added.

Arunachal Pradesh, he said, has the lowest Covid positivity rate among all the eight north-eastern states and ranked in the top six in the country in terms of tests per million population. Later, Khandu also flagged off 10 Advanced Life-Saving Ambulances.

(The above story first appeared on LatestLY on Aug 15, 2020 04:53 PM IST. For more news and updates on politics, world, sports, entertainment and lifestyle, log on to our website latestly.com).