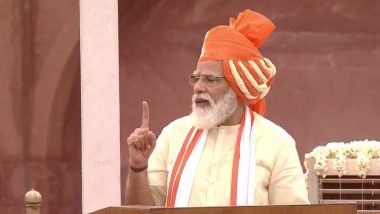 New Delhi, August 15: India's freedom struggle inspired the whole world and became a guiding light for others, said Prime Minister Narendra Modi in his address to the nation on the country's 74th Independence Day. In his address on the occasion of Independence Day, PM Narendra Modi spoke against expansionism and a range of issues including coronavirus vaccine, adding that 130 crore Indians have pledged to make India self-reliant (Aatma Nirbhar). He announced that his government aims to ensure optical fibre network in all villages across the country. He also announced the launch of National Digital Health Mission. PM Narendra Modi Speaks on Expansionism, Aatma Nirbhar Bharat, Coronavirus Vaccine in His 87-Minute Long Independence Day Speech.

"India's freedom struggle became a guiding light and inspiration for the entire world," PM Modi said remembering sacrifices of freedom fighters. The Prime Minister, in his address on the Independence Day, paid homage to the contributions of all Indians who won India its independence and all members of the armed forces and personnel who guard the country's freedom. He asserted that India has become a challenge to expansionists. Independence Day 2020: PM Narendra Modi Wishes Indians on 74th I-Day, Read His Tweet Here.

"Those who indulged in expansionism pushed the world into two world wards...The idea of ​​expansionism left some countries enslaved. Even in the midst of fierce wars, India did not allow its freedom movement to suffer...India became a challenge to expansionism," the Prime Minister said. Speaking of Aatma Nirbhar Bharat, he said he is confident that India will become self-reliant.

PM Narendra Modi, in his Independence Day speech, said everyone is asking when a vaccine for coronavirus (COVID-19) infection will be available. "I would like to assure all the citizens that our scientists are working hard for the development of vaccine," PM Modi said, adding that three potential drugs are undergoing trials at different stages.

PM Narendra Modi hailed Indian soldiers for protecting the country's borders. "From LoC to LAC, our brave soldiers gave a befitting reply to all those who tried to threaten our national security," PM Modi said, referring to ceasefire violations by Pakistan and the Chinese aggression in Ladakh. He paid tributes to 20 Indian soldiers who sacrificed their lives during a face-off with Chinese troops in Galwan valley.

"Amid COVID-19 pandemic, 130 crore Indians took the resolve to be self-reliant and Aatma Nirbhar Bharat is on the mind of India. This dream is turning into a pledge. Aatma Nirbhar Bharat has become a mantra for the 130 crore Indians today," PM Modi said. "I am confident that India will realise this dream. I am confident of the abilities, confidence and potential of my fellow Indians. Once we decide to do something, we do not rest until we achieve that goal," he added.

From Make in India to Make For World:

While urging people to become "vocal for local", PM Modi said it's time for India to make things for the whole world. "Not only Make in India, we must also embrace the mantra of Make for World," he said. "The whole world is observing the reforms taking place in India. As a result, FDI has broken all records. India saw 18 percent jump in FDI even during the pandemic," he added.

In his Independence Day address, PM Narendra Modi said the government will spend Rs 100 lakh crore for various infrastructure projects. "There is a need to give a new direction to the overall infrastructure development of the country. This need will be met from the National Infrastructure Pipeline Project. The country is going to spend more than Rs 100 lakh crore on this. About 7,000 projects of different sectors have also been identified. It will bring a new revolution in infrastructure sector," the Prime Minister said.

The Prime Minister hailed the New Education Policy 2020. "Education has a key role in the making of Aatma Nirbhar, modern, new and prosperous India. So, we have brought the new education policy after three decades that has been welcomed throughout the country, which instils new confidence," he said.

Speaking on Ladakh, PM Modi said: "By turning Ladakh into a union territory, the old demand of its people has been met. Ladakh, situated in the heights of the Himalayas, is moving forward today to touch new heights of development."

The Prime Minister hailed corona warriors and asserted that India will win against the pandemic. "In this age of COVID, frontline workers have been serving the entire country tirelessly. I bow to them. I am confident that 130 crore Indians will fight and defeat this virus," he said. PM Modi also paid condolences to the parts of the country facing natural calamities and disasters and reassured his fellow citizens of full support in this hour of need.

(The above story first appeared on LatestLY on Aug 15, 2020 08:48 AM IST. For more news and updates on politics, world, sports, entertainment and lifestyle, log on to our website latestly.com).