Rashtrapati Bhavan, the official residence of President Ram Nath Kovind, was lit up in various colours on Friday. The building was decorated in Tri-Colour on the eve of 74th Independence Day. Apart from Rashtrapati Bhavan, Parliament House, CSMT and India Gate were also illuminated. 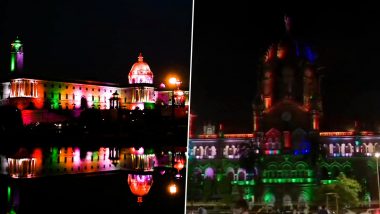 North Block and South Block in Delhi were also lit up. In Mumbai, several buildings were illuminated, including Chhatrapati Shivaji Maharaj Terminus (CSMT) and Brihanmumbai Municipal Corporation (BMC) building on the eve of Independence Day.

Every year, Independence Day in India is observed on August 15. On this day in 1947, India became free from the colonial British rule and was declared a free and sovereign nation. On Saturday, India will celebrate its 74th Independence Day.

(The above story first appeared on LatestLY on Aug 14, 2020 09:43 PM IST. For more news and updates on politics, world, sports, entertainment and lifestyle, log on to our website latestly.com).