Shri Goyal said that the 'whole of govt approach' had been taken to the next level to 'whole of country approach' to acheive this remarkable target. He also said that the achievement was not just about meeting targets but about building confidence and about exploring new markets. 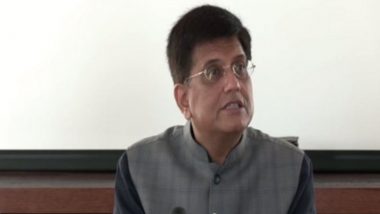 The Union Minister of Commerce and Industry, Consumer Affairs, Food and Public Distribution and Textiles, today said that the achievement of USD 400 billion exports was the result of a concerted, collective effort by every sector, every stakeholder in the nation.

Merchandise exports from India have crossed $400 billion in the current financial year, 9 days ahead of schedule. This is far higher than the previous record of USD 330 billion achieved in 2018-19. Hon’ble Prime Minister Shri Narendra Modi has tweeted the following:

“India set an ambitious target of $400 Billion of goods exports & achieves this target for the first time ever. I congratulate our farmers, weavers, MSMEs, manufacturers, exporters for this success.

This is a key milestone in our Aatmanirbhar Bharat journey.” The Minister was addressing a Press Conference held to mark the occasion in New Delhi today. Shri Goyal said that the achievement of the lucrative export target showed the world that inspite of facing numerous challenges, with sheer grit, determination, capability and talent, India would surmount all obstacles.

The Minister expressed his gratitude to all the exporters, farmers, weavers, MSMEs, manufacturers, Indian missions abroad and all other stakeholders who he said, were the real heroes behind this achievement. Rajya Sabha Passes Jammu and Kashmir Appropriation Bill, 2022 With Voice Vote.

He thanked the Prime Minister, Shri Narendra Modi for leading from the front and for his relentless focus on exports. It was the clarion call given by the Prime Minister that inspired the industry to make a quantum jump in exports, he said.

The Minister said that there was a detailed strategy in place, including specific targets set - country-wise, product-wise & EPC-wise, monitoring and course correction, behind the achievement of the export target.

Shri Goyal said that the 'whole of govt approach' had been taken to the next level to 'whole of country approach' to acheive this remarkable target. He also said that the achievement was not just about meeting targets but about building confidence and about exploring new markets.

The Minister applauded the media for consistently encouraging businesses through positive reporting, encouraging editorials, helping making this a national mission. Underscoring the direct linkage that exports have with employment generation, especially in labour intensive sectors, the Minister said that when products of a brass trader from Moradabad and farmers from Varanasi get appreciated in the global market, it is a testimony to the fact that employment and prosperity is increasing from exports

The Minister also appreciated Indian exporters for maintaining the momentum throughout the year despite challenges caused by successive COVID-19 waves. The Minister said that the achievement truly called for a celebration and added that it sent out the message of a confident future for the nation. India is ready for the World with a new identity of quality and reliability, he said.

Keeping in view the critical role of exports in catalyzing economic activities which were impacted by the COVID-19 pandemic, the Department of Commerce embarked upon the inspiration provided by Hon’ble PM Shri Modi during his Address and interaction with exporting community, Ambassadors / HCs / Commercial Missions, Line Ministries/ Departments, State/UTs, EPCs, Commodity Boards/ Authorities, Industry/Trade Associations, etc on 6th August 2021 on the theme of “Local Goes Global - Make in India for the World”.

During the Address, Hon’ble Prime Minister set an ambitious target of US$ 400 billion of merchandise exports for 2021-22 for the nation to achieve. He exhorted the exporting community to search for new products in the export basket, look for newer destinations and ensure deeper penetration of the existing product and markets.

Thus, in order to achieve the target and approach set by the Hon’ble PM, the Department of Commerce disaggregated the $400 Billion target in terms of regions and countries as well as product/commodity groups. The government prepared a detailed strategy for achieving the targets and an elaborate monitoring system.

The disaggregated targets have enabled tight monitoring by Country/Region/Mission/Export Promotion Councils. The Commodity Divisions of Department of Commerce have held regular review meetings with the concerned EPCs under their jurisdiction.

Thus, notwithstanding the challenges posed by successive waves of Covid, India’s merchandise trade performance has shown impressive growth and exports remained above USD 30 Billion for eleven consecutive months (likely to be twelve consecutive months at the end of March) during April to February wherein December 2021 in particular recorded the highest ever monthly merchandise exports recorded at USD 39.3 billion.

Engineering goods exports have gone up by nearly 50% vis-à-vis last year. Higher engineering exports, apparel and garment export, etc. indicate that the misconception of India being a major exporter of primary commodities is gradually changing. We are now exporting more and more value added and high end exports and this effort by our technology driven industries should continue. Export of Cotton Yarn/Fabrics/Made-ups, Handloom Products etc, Gems and Jewellery, Other Cereals and Man-Made Yarn/Fabrics./Made-up etc. have registered a growth rate between 50%-60%.

Agriculture sector has made noteworthy progress, especially during the pandemic, with India emerging as a major global supplier of food / essential agriculture products. Agriculture exports buoyancy is driven by commodities such as rice (both basmati and non-basmati), marine products, wheat, spices and sugar, among others, recording the highest ever agricultural products export in 2021-22. Air India Pushed Into Losses, Disinvestment to Protect Public Money, Says Civil Aviation Minister Jyotiraditya Scindia.

Till 21st March 2022, Organic & Inorganic Chemical, Other Cereals, Petroleum Products, Cotton Yarn/Fabrics/Made-ups, Handloom Products Etc., Mica, Coal and Other Ores, Minerals Including Process, Engineering Goods and Plastic and Linoleumare the major Commodities which have achieved more than the export target.

The Major Commodities Rice, Marine Products, Jute Mfg. Including Floor Covering, Carpet, Cereal Preparations And Miscellaneous Processed Item, Electronic Goods, Coffee, Gems And Jewellery and Handicrafts Excl. Hand Made which have achieved between 90% to 100%of the total export target.

The government has been working round the clock to provide a conducive environment and infrastructure for our industry and exporters to enhance their export performance. Policies and schemes aligned with the goal are being introduced and implemented for their benefit.

The smooth roll out of RoDTEP and ROSCTL even in the midst of the pandemic reflects the strong resolve of the government to walk the talk. The Interest Equalisation Scheme has been extended to exporters and is likely to benefit a large number of MSME exporters.

Rigorous efforts for domestic capacity enhancement for deepening integration in the Global Value Chains are being made by working in close partnership with the industry to identify areas where India’s competitive advantages. We will therefore work on strengthening our capabilities and create for the world on the lines of Make in India. PLI schemes for 13 key sectors of manufacturing starting from FY 2021-22 have been announced.

A policy shift in the approach envisaged in the Districts as Exports Hub (DEH) initiative has been adopted to boost local production and make Districts active stakeholders in driving export growth of local products/services. Consistent efforts to build and provide export promoting infrastructure are being undertaken via providing appropriate funding, insurance, credit provisions etc.

Thus, an effort has been made to set up a firm backward - forward linkage, starting from the district level to the overseas market with the help of multiple stakeholders. In between, the emphasis has been effective and efficient coordination among all stakeholders i.e. district units, State and Central Governments, line Ministries, EPCs, MSMEs exporting communities and our mission overseas to ensure breaking of silos to achieve a coherent and coordinated action for fulfilment of exports target.

(The above story first appeared on LatestLY on Mar 23, 2022 07:15 PM IST. For more news and updates on politics, world, sports, entertainment and lifestyle, log on to our website latestly.com).