Scindia said the decision to merge two airlines with completely different work cultures, purchase of 111 aircraft, liberalisation of bilateral rights when Indian air carriers did not have the capacity to fulfill it pushed Air India to post a daily loss of Rs 20 crore. 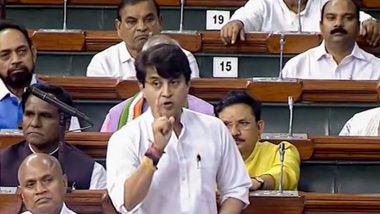 New Delhi, March 23: Under attack from the opposition over the sale of Air India to Tata Group, Civil Aviation Minister Jyotiraditya Scindia on Wednesday hit back and accused the UPA regime for saddling the then profit-making national carrier with a huge debt burden.

Responding to the debate on the Demands for Grants of the Civil Aviation Ministry in Lok Sabha, Scindia listed out the merger of Air India and Indian Airlines, purchase of 111 new aircraft and liberalisation of bilateral rights as the reasons for the downfall of the national carrier.

Earlier, opposition members had slammed Scindia for not referring to the sale of Air India in his nearly hour-long reply to the eight-hour debate on the budgetary allocation to the civil aviation ministry.

"Before 2005, Air India was making a profit of Rs 15 crore per annum and Indian Airlines was making profit of Rs 50 crore. These airlines were made to purchase 111 aircraft at a cost of Rs 50-55,000 crore which pushed the national carrier into deep debts," Scindia said. Airbus in Talks with Tatas to Supply New Aircraft for Air India.

As opposition members stood up in protest, Scindia said he had not referred to Air India at all, but was forced to speak after Trinamool leader Sudeep Bandyopadhya and Congress leader Adhir Ranjan Chowdhury raised the issue.

Scindia said the decision to merge two airlines with completely different work cultures, purchase of 111 aircraft, liberalisation of bilateral rights when Indian air carriers did not have the capacity to fulfill it pushed Air India to post a daily loss of Rs 20 crore.

"It is under these circumstances the Prime Minister took a decision to put an end to these losses. He decided on disinvestment of Air India to protect the money of 135 crore Indians and put it to good use through schemes such as Ujjwala, Jal Jeevan Mission," Scindia said.

On concerns raised by members, Scindia said the shareholder agreement with the Tatas clearly mentioned that there will not be any employee layoffs during the first year. After the first year, the employees will be offered a voluntary retirement scheme, he said, adding that the retiring and retired employees will continue to receive medical benefits under CGHS.