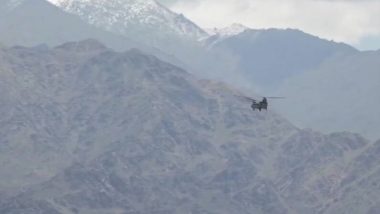 Ladakh, June 26: Amid the rising tension between India and China, Indian Air Force aircraft have been carrying out sorties in Leh area in Ladakh. According to an ANI update, the air activity has gone up in the region after the stand-off with China on the Line of Actual Control (LAC) recently.

The violent clashes between the Indian Army and the Chinese troops occurred on June 15. 20 In the attack, 20 Army soldiers lost their lives in the ‘premeditated’ attack by the People's Liberation Army. Chinese Nationals Will No Longer Be Allowed Accommodation in Hotels, Guest Houses in Delhi, As #BoycottChina Drive Intensifies

#WATCH Ladakh: Indian Air Force aircraft carrying out sorties in Leh. The air activity has gone up in the region after the stand-off with China on the Line of Actual Control (LAC) there. pic.twitter.com/6L0Bqn3hTY

The Army mentioned that"the Corps Commander level talks between India and China on June 22, 2020, were held at Moldo in a cordial, positive and constructive atmosphere. There was a mutual consensus to disengage. Modalities for disengagement from all friction areas in Eastern Ladakh were discussed and will be taken forward by both sides.

On the other hand, the #Boycott China protests have intensified in the country. From people urging others to boycott Made-in-China goods to not allowing Chinese nationals accommodation in hotels and guest houses in the national capital.

(The above story first appeared on LatestLY on Jun 26, 2020 02:14 PM IST. For more news and updates on politics, world, sports, entertainment and lifestyle, log on to our website latestly.com).