Chinese Nationals Will No Longer Be Allowed Accommodation in Hotels, Guest Houses in Delhi, As #BoycottChina Drive Intensifies 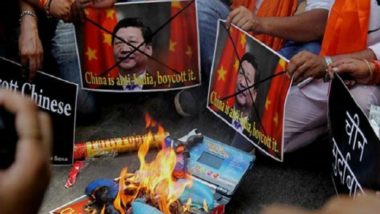 Delhi, June 24: As the call for Boycott China intensified, Delhi's Hotel and Guest House Owners Association (Dhurva), a group of budget hotels in Delhi, announced that no Chinese guests will be allowed accommodation in hotels and guesthouses in the national capital. According to an India Today report, this decision comes after Confederation of All India Traders (CAIT) urged traders to boycott China.

#Delhi: While prarticipating in “Boycott Chinese Goods” Campaign of the CAIT, the Hotel & Guest House Association of Delhi declared that now onwards, no Chinese national will be given accommodation in Hotels and Guest Houses of Delhi, says @CAITIndia

Following the violent face-off between India and Chinese army in the Galwan Valley in which 20 Indian soldiers were killed, there have been widespread protests across several parts of the country against China. People got down to streets to burn the Chinese flag and effigies of President Xi Jinping. There were reports and videos doing the rounds of how people were seen destroying their made-in-China TV sets and mobile phones to bits and pieces.

(The above story first appeared on LatestLY on Jun 25, 2020 01:08 PM IST. For more news and updates on politics, world, sports, entertainment and lifestyle, log on to our website latestly.com).