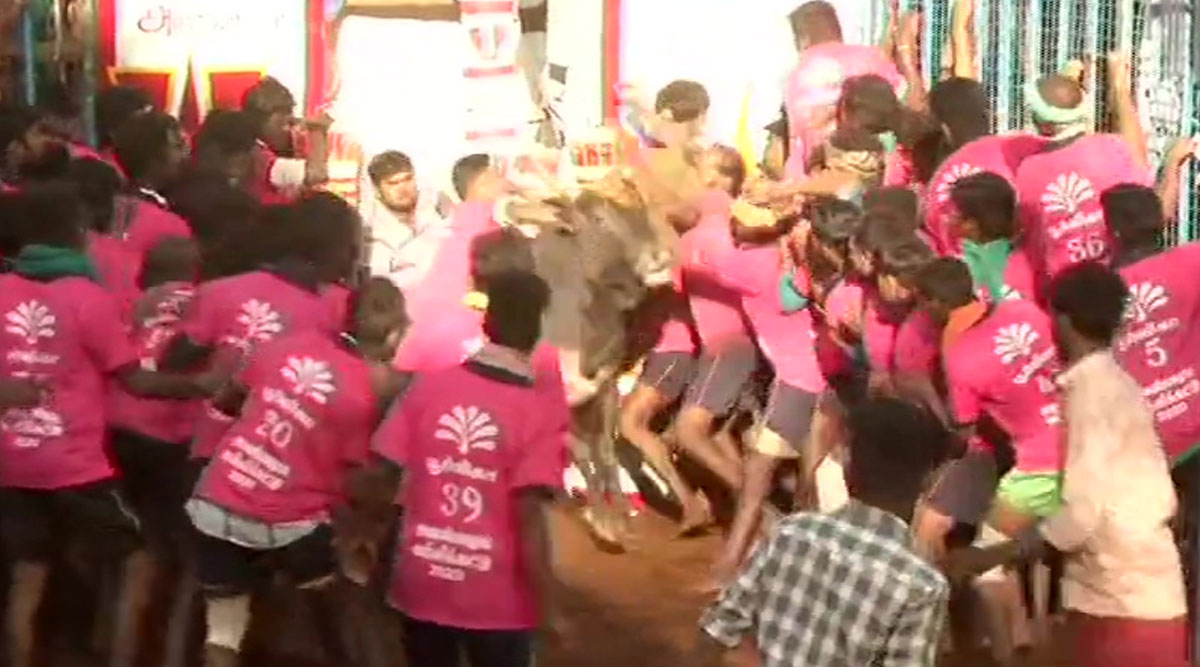 Madurai, January 15: Tamil Nadu’s much-awaited Jaillikattu event has begun in Madurai from today. In temple-town of Madurai, the bull-taming sport will be played at three villages – Avaniyapuram, Alanganallur and Palamedu. According to reports, a total of 730 bulls in Avaniyapuram, 700 bulls in Alanganallur and 650 bulls in Palamedu are participating in Jallikattu competitions this year. Ahead of the start of the event, district collector, along with a local minister, examined the arrangements. Jallikattu 2018: Aadhaar Registration Mandatory For Bull Tamers To Register For The Event.

At Avaniyapuram the sport will be played today, while at Alanganallur and Palamedu it will be played on January 16 and 17 respectively. A total of 21 ambulance vans are also ready to provide medical facility to the injured players. Players have been divided into batches. Retired Principal District Judge C Manickam was appointed by the Madurai Bench of the Madras High Court as Chairman of the organising committee for Jallikattu. Those Below 21 Won't Be Allowed to Participate in Jallikattu: Madurai District Collector.

Tamil Nadu: #Jallikattu event begins at Avaniyapuram in Madurai. 730 bulls in Avaniyapuram, 700 bulls in Alanganallur and 650 bulls in Palamedu are participating in Jallikattu competitions this year. pic.twitter.com/BzmJV9J5az

Speaking to reporters, Manickam said, “We've divided the players into a batch of 75 each, 60 bulls will be released one by one in one go. Top police officials are present at the spot to deal with any situation.” Around 12 closed circuit television cameras have been placed in the area where the Jallikattu will be played. Around 2,000 bulls are likely to take part in various Jallikattu events all across Tamil Nadu during the Pongal festival.