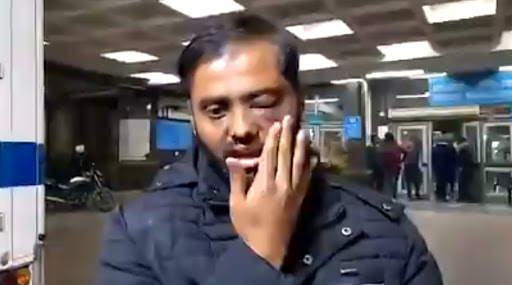 New Delhi, December 18: Days after the violent clash in Jamia Millia Islamia, a sad news is coming from the national capital where an LLM student from JMI -- Mohammed Minhajuddin -- is on the verge of losing his eyesight. The sight loss of Minhajuddin is not due to natural causes, but allegedly because of being lathi-charged by police and CRPF personnel.

Stating that he was beaten mercilessly by the personnel of Delhi Police and CRPF on Sunday evening, Minhajuddin said that he was studying in the library when the police barged in and started thrashing him. He said, as quoted by New18, "My index finger got fractured and one of my eyes was severely affected. I tried to run towards the toilet. This is the video that went viral, you can even see my eye bleeding in the video." Kamal Haasan Backs Anti-CAA Protesters in Chennai, Accuses AIADMK Govt of Turning 800 Students Into 'Refugees' by Locking Gates of Madras University.

Soon after the video on the plight on the students was shared on the social media, it gained momentum, and netizens began to retweet from their personal handle. Among the many, include claimed journalist Rajdeep Sardesai, who posted the video and questioned the Central government on what action would be taken against the perpetrators.

This young student Minajuddin has lost his eye. His crime? He was studying in the Jamia library when the police entered! Will any Govt minister have even a word of condolence for the young man? Whither compassion? pic.twitter.com/Ewxqny8UP8

It is to be known that reports of brutal assault on Jamia Millia Islamia students were reported on Sunday, when Delhi Police entered the varisty and started beating the students in the library. Earlier on that day, most of the JMI students were protesting against the CAA in New Delhi and some miscreants started vandalising public property. Following this, Delhi Police attacked those miscreants and in that course they entered the JMI.