Indian and Pakistan armies traded heavy fire on the Line of Control (LoC) in Gurez sector of Bandipora district on Friday. 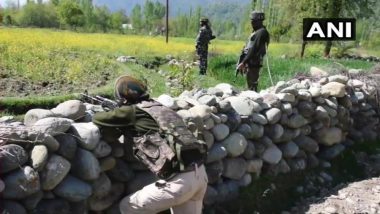 Srinagar, Sep 18: Indian and Pakistan armies traded heavy fire on the Line of Control (LoC) in Gurez sector of Bandipora district on Friday.

The Pakistan army resorted to unprovoked shelling to target Indian positions, Colonel Rajesh Kalia, defence ministry spokesman said. It used mortars and other weapons at LoC in Kanzalwan area. 4 Years of Uri Attack: Remembering the Martyrs Whom India Lost on This Day, Here Are the Names of Indian Soldiers Who Died in the Terror Attack.

"Befitting response is being given by the Indian army," spokesman added. Reports from the area said heavy exchange of fire has been going on between the two sides since 11 a.m.

Panic gripped villagers living close to the LoC in Gurez and some of them started shifting with families to safer places.

(The above story first appeared on LatestLY on Sep 18, 2020 03:32 PM IST. For more news and updates on politics, world, sports, entertainment and lifestyle, log on to our website latestly.com).