4 Years of Uri Attack: Remembering the Martyrs Whom India Lost on This Day, Here Are the Names of Indian Soldiers Who Died in the Terror Attack 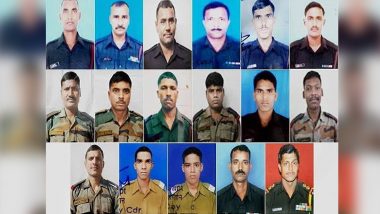 New Delhi, September 18: On this day, four years back, the horrific Uri attack took place. 18 soldiers were killed in the attack on the Indian Army base in Uri on September 18, 2016. The attack started a gun-battle between the terrorists and the Army that lasted about six hours.

The four terrorists who had entered the LOC, chose a temporary fuel depot having hundreds of litres of petrol, diesel, and kerosene for the massive grenade attack and it killed the soldiers who were sleeping nearby. Uri Terror Attack: Twitterati Pay Tribute to Martyrs Who Lost Their Lives in The Dastardly Attack.

During the investigation of the attack, it was revealed that the terrorists were carrying AK-47, they had 50 grenades to set off fire and with the help of which terrorists exploded the fuel depot.

Here's the list of 18 Martyrs whom the county lost on that day:

The attacks shook the nation and shaped India's policy of no tolerance towards terror approach in days to come.

(The above story first appeared on LatestLY on Sep 18, 2020 11:50 AM IST. For more news and updates on politics, world, sports, entertainment and lifestyle, log on to our website latestly.com).