At least five people were killed while two others suffered injuries after their tempo fell into a gorge in Jammu and Kashmir's Ramban district on Tuesday. The injured passengers are being treated at Ramban district hospital. 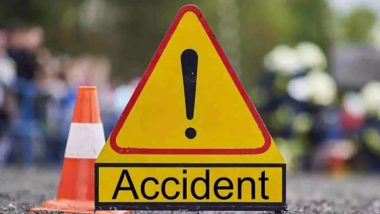 Srinagar, December 15: In a tragic incident, five people lost their lives while two others sustained injuries in a road mishap in Jammu and Kashmir's Ramban on Tuesday. According to reports, a tempo drifted from the road and plunged into a gorge in the Ramban district resulting in the death of the driver and four other passengers. The two other passengers of the tempo who sustained injuries are being treated at the Ramban district hospital. Himachal Pradesh: 6 Killed After Bus Falls Into Gorge in Tissa.

According to a report by the Hindustan Times, the deceased persons were a part of an extended family and were on their way back on Ramban from Doda when the tempo they were travelling in fell from Chanderkote-Kastigarh link road, into Chamutri Nullah at Chilai in Chuchater village in Ramban. The family was returning after offering condolences to the family of ASI Ghulam Hussain Bhat, who was killed in a terror attack in Srinagar on Monday. Jammu and Kashmir: Vehicle Skids Off Road, Falls into Gorge in Poonch, 2 Dead.

Police reportedly said that it appears that the driver failed to negotiate a turn and the vehicle slipped in the gorge. "It is a very remote and hilly area with no parapets by the narrow and congested road. The driver, it appears, failed to negotiate a sharp curve,” Ramban District Commissioner Mussarat-ul-Islam was quoted as saying by the HT.

(The above story first appeared on LatestLY on Dec 15, 2021 10:10 AM IST. For more news and updates on politics, world, sports, entertainment and lifestyle, log on to our website latestly.com).