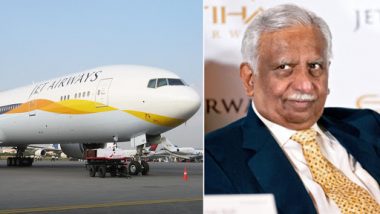 Mumbai, September 6: The founder and former chairman of Jet Airways Naresh Goyal was questioned by the Enforcement Directorate (ED) on Friday. He was grilled in connection with the alleged violation of the foreign exchange law. "He was called for questioning on Wednesday back but due to some issues, he wasn't able to join the investigation. Today he appeared before us and we are recording his statement," an official said. Enforcement Directorate Searches Jet Airways Founder Naresh Goyal's Premises in Delhi, Mumbai.

This is the first time that the ED questioned him after it conducted searches against him earlier. His statement has been recorded under the FEMA (Foreign Exchange Management Act) at the central agency's office in Mumbai. During the investigation, the agency claimed that they have detected foreign bank accounts linked to Goyal with a huge amount of money. Etihad Airways Expresses Interest in Cash-Crunched Jet Airways' Revival, Lenders Ask Airlines to Find Indian Partner First.

In August, Goyal's group companies and their directors were searched. The ED is probing charges that these firms allegedly carried out suspicious transactions under the pretence of selling, distribution and operating expenses. It suspects that costs at these companies were allegedly booked at false and high costs and as a result, they projected huge losses.

(The above story first appeared on LatestLY on Sep 06, 2019 06:20 PM IST. For more news and updates on politics, world, sports, entertainment and lifestyle, log on to our website latestly.com).