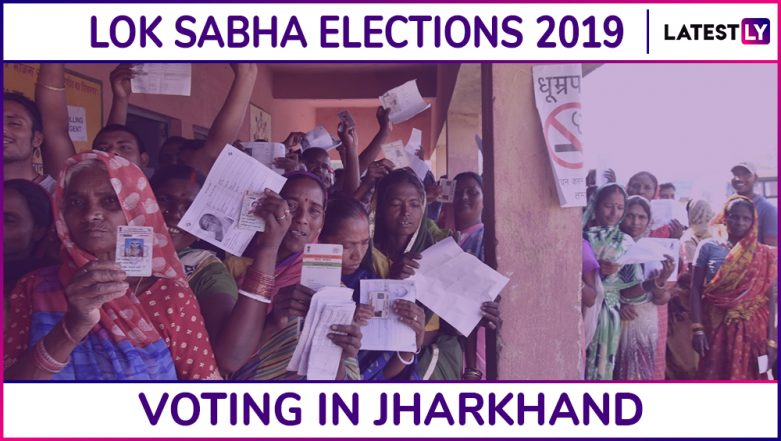 Ranchi, May 12: Polling in 4 out of 14 constituencies of Jharkhand began at 7 pm on Sunday in the sixth phase of the seven-phased 2019 Lok Sabha Elections on May 12 and concluded in the evening. The 4 constituencies that went to polls today in the sixth phase are Giridih, Dhanbad, Jamshedpur and Singhbhum. A total of 64.50 per cent polling was recorded, said the update released by the Election Commission.

In the fifth phase, voting took place in 2 seats while 4 seats went into poll each in the fifth. The voting in the remaining 3 seats will be held in the final phase on May 19. Jharkhand Lok Sabha Elections 2019 Schedule: Constituency Wise Dates Of Voting And Results For General Elections.

The main contest is between the Bharatiya Janata Party and Indian National Congress. In the six-phase, the key constituencies are Giridih, Dhanbad, and Jamshedpur. Twenty-three candidates participated for the Jamshedpur constituency which went to the polls on May 12. The key candidates in the Jamshedpur constituency for Lok Sabha Elections 2019 are Bidyut Mahato of Bharatiya Janata Party (BJP), Ashraf Hussain of Bahujan Samaj Party, Anjana Mahata of All India Trinamool Congress and Champai Soren of Jharkhand Mukti Morcha, an ally of Congress,  among others. Lok Sabha Elections 2019 Schedule: Voting In 7 Phases From April 11 to May 19, Counting And Results On May 23; Check All Dates For General Elections.

The voting is taking place through EVM and VVPAT machines at every polling booth. Voting in the remaining 3 Lok Sabha constituencies of the state will be held in the last phase on May 19. The counting of votes will take place on May 23 and on the same day results will be announced.

In the 2014 general polls, Jharkhand was swept by Prime Minister Narendra Modi's wave. The BJP had won 12 seats in the state, whereas, the remaining 2 were retained by the Jharkhand Mukti Morcha, an ally of the Indian National Congress.