Speaking to ANI, the journalist alleged that GRP personnel stripped him naked and urinated in his mouth. 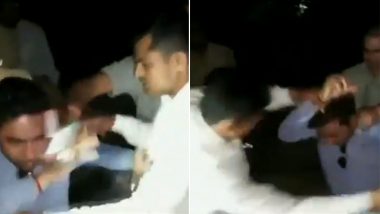 Shamli, June 12: A local journalist who was covering a train derailment was brutally thrashed by GRP personnel in Uttar Pradesh Shami. The police brutality, which took place on June 11, was caught on camera. In the video, GRP personnel, dressed in plain clothes, are seen beating the scribe. Speaking to ANI, the journalist alleged that GRP personnel stripped him naked and urinated in his mouth.

The journalist, whose identity was not immediately known, was reportedly covering a goods train derailment near Dhimpaura. Two coaches of a goods train slid off the track, disrupting train services on the Shamli-Saharanpur line. "They were in plain clothes. One hit my camera and it fell down. When I picked it up they hit and abused me. I was locked up, stripped and they urinated in my mouth," the journalist told ANI. Two Army Jawans Thrashed After Argument With Restaurant Employees in Baghpat, Seven Held.

Speaking to local reporters from within the GRP station premises, where he was locked up, the scribe said his mobile phone was also seized. He said he was assaulted over the course of his coverage of the derailment. "A lot of police personnel were present, one or two were dressed in civil clothes. They beat me up all the way from where the accident occurred to the station, which is located almost 200 metres away from the spot," he was quoted as saying.

#WATCH Shamli: GRP personnel thrash a journalist who was covering the goods train derailment near Dhimanpura tonight. He says, "They were in plain clothes. One hit my camera&it fell down. When I picked it up they hit&abused me. I was locked up, stripped&they urinated in my mouth" pic.twitter.com/nS4hiyFF1G

Following the incident, Inspector Rakesh Kumar, who allegedly ordered the assault on the journalist, and Constable Sanjay Pawar have been suspended. The victim has been released.

(The above story first appeared on LatestLY on Jun 12, 2019 09:26 AM IST. For more news and updates on politics, world, sports, entertainment and lifestyle, log on to our website latestly.com).