Delhi Commission for Women Chairperson Swati Maliwal has written to President Ram Nath Kovind demanding withdrawal of Kangana Ranaut's Padma Shri award and registration of an FIR against the actress on sedition charges. 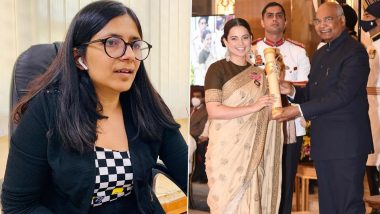 Ranaut recently made a statement in a TV show describing India's Independence in 1947 as "bheek" (alms). Kangana Ranaut Gets Slammed For Her ‘Freedom Came in 2014’ Remark; MVA Govt Demands Her Arrest and Asks Centre to Take Actor’s State Honours.

Urging the President to take immediate cognisance of the statement, the DCW chief said, "The remarks are not only derogatory but also completely disregards and insults the sacrifice made by our freedom fighters."

In the letter, Maliwal wrote, "Our great freedom fighters like Mahatma Gandhi, Bhagat Singh and countless others have sacrificed their lives to bring freedom to our nation...It was only through these sacrifice and martyrdom that we got freedom from British rule. Ranaut's comments have hurt the sentiments of lakhs of Indians and this statement is seditious in nature."

Maliwal also expressed her protest to Ranaut's statements over Twitter.

"Kangana Ranaut is such a woman who mocks the martyrdom of Gandhi, Bhagat Singh; and the freedom achieved by the sacrifice of millions of people seems to her as alms! She needs treatment, not reward," tweeted the DCW chief.

(The above story first appeared on LatestLY on Nov 15, 2021 10:52 AM IST. For more news and updates on politics, world, sports, entertainment and lifestyle, log on to our website latestly.com).