The lifelines- BMTC and Namma Metro – will ply as usual, and the authorities have informed that they will take a call depending on the situation of the state. 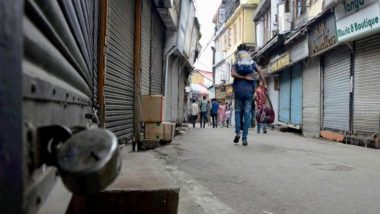 Karnataka, February 12: Karnataka Sanghatanegala Okkoota, a congregation of various pro-Kannada organisations would observe a bandh in the state on Thursday. According to a Times Now report, their demand is a major share in the reservation of jobs for Kannadigas in both government and private sectors. The organisation has been protesting against this since a long time and February 13 happens to be the 100th day of the agitation.

Reportedly, the bandh is expected to impact the lives of people in the state, as cab aggregators Ola and Uber have extended their support too. Other associations like Jai Bharatha Vehicle Owners and Drivers Association and Adarsha Auto and Taxi Union have also given their support to the bandh. Till now there is no news on whether schools, colleges and hospitals operations will be impacted due to the bandh. Bharat Bandh on January 8, 2020: What Will Remain Open and Closed in Pan-India Strike Called by Trade Unions.

The lifelines- BMTC and Namma Metro – will continue to ply as usual, and the authorities have informed that they will take a call depending on the situation of the state. A nation-wide bandh was declared by trade unions on  January 8, 2020, against the policies of the government. In December last year, several Left, Dalit and Muslim outfits called for a Karnataka bandh against the Citizenship Amendment Act 2019 and the proposed nationwide National Register of Citizens (NRC). Anticipating major protests, authorities had imposed Section 144 of the Criminal Procedure Code (CrPC) in several parts of Karnataka.

(The above story first appeared on LatestLY on Feb 12, 2020 09:18 AM IST. For more news and updates on politics, world, sports, entertainment and lifestyle, log on to our website latestly.com).