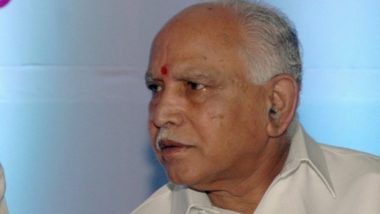 Bengaluru, July 29: The Karnataka government has launched a Rs 5,000-crore project to build a life sciences park in the southern suburbs of the tech city, which has a potential to generate about 50,000 jobs, an official said on Wednesday.

"The work on the Bengaluru Life Sciences Park began as Chief Minister B.S. Yediyurappa laid its foundation stone on 52 acres of land at the Electronics City earlier in the day," the official told IANS.

To be built under the public-private partnership (PPP) by Labzone Corporation, the 9-million square feet mega park's first phase is scheduled to be completed by December 2022 to house about 150 domestic and overseas biotech firms.

"The park was envisioned two decades ago by the state vision group's chairperson and Biocon founder Kiran Mazumdar Shaw to build an ecosystem for promoting and developing biotechnology in the southern state on a global scale," said Deputy Chief Minister C.N. Ashwath Narayan on the occasion.

With the help of Institute of Bioinformatics and Applied Biotechnology for R&D, the Bengaluru Bioinnovation Centre for synergy between the academia and entrepreneurship, and the Centre for Human Genetics as part of the ecosystem, the life sciences park will become a global biotech hub.

"With 380 firms and 200 start-ups, Karnataka is home to about 60 per cent of the biotech firms in the country, which have a 9 per cent market share in Asia and 35 per cent in the Indian subcontinent," said Narayan, who also is the state's minister for IT, BT and Science and Technology.

The park will also offer incubation space with shared instrumentation lab facilities and office suites for biotech enterprises and start-ups.

"The Indian biotech sector is in the forefront of medicine and treatment and RT-PCR (real-time polymerase chain reaction) tests, conducted to find if a person is Covid-19 positive or negative," noted Narayan.

Shaw said the convergence of IT and BT will attract global biotech firms to invest and make use of the facilities in the integrated park.

"My endeavour is to put Karnataka and India on the global innovation map, with the helix biotech park as the nerve centre of all activities," Shaw said.

Park's Chief Executive Chirag Purushotham said about 60 per cent of the space would be reserved for the biotech cluster in the PPP mode.

"The park will have R&D facilities in 20 acres, start-ups in 10 acres for disruptive and innovative products, and enterprises and multinationals in the remaining 22 acres," said Purushotham.

(The above story first appeared on LatestLY on Jul 29, 2020 03:49 PM IST. For more news and updates on politics, world, sports, entertainment and lifestyle, log on to our website latestly.com).