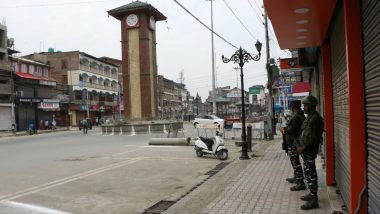 Srinagar, June 29: An order issued by the Food, Civil Supplies and Consumer Affairs Department in Kashmir asking oil marketing companies to stock up LPG cylinders for two months in the valley had triggered widespread speculations with former Chief Minister Omar Abdullah seeking clarification from the government. The Jammu and Kashmir administration then issued a statement, saying the order regarding increasing the stock of LPG in the valley was issued in view of monsoon. Jammu & Kashmir: Religious Places to Remain Closed, Inter-State Travel Barred in Revised Lockdown Guidelines.

"We all know that the NH-44, between Ramban-Jawahar Tunnel stretch, behaves in an unpredictable manner during the rains. Currently, we maintain stock of nearly a month in Kashmir," an official spokesperson told news agency PTI. "We have requested the LPG companies to explore the feasibility of maintaining the stock for nearly two months to prevent any panic situations that may arise in the event of highway closure for longer duration or on multiple occasions during the next three months," he added. More Than 100 Terrorists Eliminated in Kashmir This Year: Nityanand Rai.

While the order was issued for "ensuring adequate stocking of LPG in Kashmir", the spokesperson said, some people are spreading rumours regarding it. "The same (letter) has been written...to prevent any shortfall of essential commodities (particularly LPG) during the ensuing monsoon season," he added. Citing another communique by the Ganderbal district police for making provisions for lodging of central forces, Omar Abdullah said such orders create panic in Kashmir.

"Government orders are creating panic in Kashmir & unfortunately after all the lies & false assurances last year even if/when the government explains these orders hardly any of us will take the assurances at face value. That said they still need to explain these orders (sic)," Omar tweeted, referring to the Centre's decision to withdraw Jammu and Kashmir's special status granted under Article 370 of the Constitution in August last year.

(The above story first appeared on LatestLY on Jun 29, 2020 08:45 AM IST. For more news and updates on politics, world, sports, entertainment and lifestyle, log on to our website latestly.com).