Attorney General KK Venugopal has given consent to initiate criminal proceedings against stand-up comedian Kunal Kamra for contempt of court. 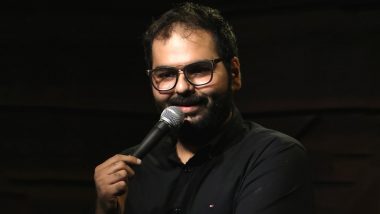 New Delhi, November 12: Attorney General KK Venugopal has given consent to initiate criminal proceedings against stand-up comedian Kunal Kamra for contempt of court. Now, Kunal Kamra will face the contempt of court case for his tweets criticising the Supreme Court and Justice DY Chandrchud for ordering the release of Republic TV Editor-in-Chief Arnab Goswami on interim bail. Prashant Bhushan to Submit Re 1 Fine in Contempt Case.

Two Pune-based advocates and a law student sought the Attorney General's consent to initiate contempt proceedings against Kamra who had criticised the Supreme Court for granting bail to Arnab Goswami. The apex court granted him bail following his arrest on November 4 in a case of abetment to suicide of Mumbai architect Anvay M. Naik and his mother Kumud Naik on May 5, 2018, in Alibaug. Attorney General Declines Plea for Contempt Proceedings Against Swara Bhaskar.

Reacting to the top court's order, Kamra tweeted: "The Supreme Court of this country is the most Supreme joke of this country..." In another tweet, the comedian said: "The pace at which the Supreme Court operates in matters of "National Interests" it’s time we replace Mahatma Gandhi’s photo with Harish Salve’s photo." He had also targetted Justice DY Chandrachud.

"DY Chandrachud is a flight attendant serving champagne to first class passengers after they’re fast tracked through, while commoners don’t know if they’ll ever be boarded or seated, let alone served (sic)," Kamra had tweeted. He had also shared a picture of Supreme Court building in the saffron shade and depicting a BJP flag hoisted in the foyer of the apex court.

The picture of the Supreme Court building in saffron colour with the BJP flag is a "gross insinuation against the entirety of the Supreme Court of India that the SC is not an independent and impartial institution and so too its judges but on the other hand is a Court of the ruling party, the BJP existing for the BJP's benefit. All this in my opinion constitutes criminal contempt of court," the AG said.

(The above story first appeared on LatestLY on Nov 12, 2020 05:01 PM IST. For more news and updates on politics, world, sports, entertainment and lifestyle, log on to our website latestly.com).