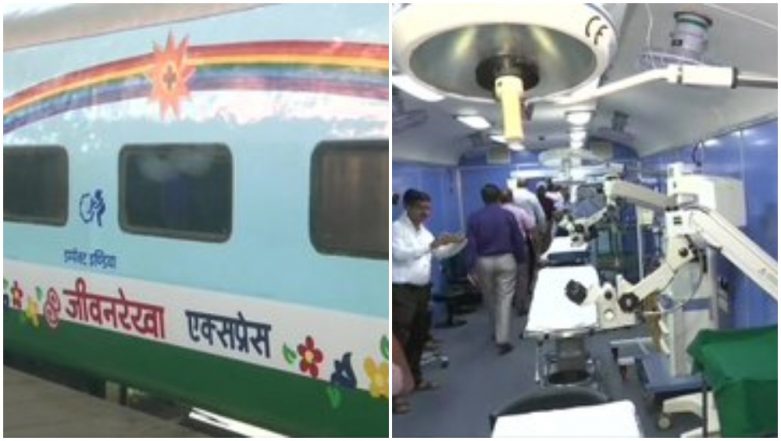 Mumbai, August 30: India's first hospital train, LifeLine Express, arrived at Chhatrapati Shivaji Maharaj Terminus (CSMT) on Thursday. The seven-coach Express train, better known as Jeevan Rekha Express, is donated by the Indian Railways to bring healthcare facility to doorstep of the rural population who cannot reach a hospital. According to a tweet by ANI, the train was inaugurated for its new set of trips at CSMT on Thursday. So far, the Lifeline Express has provided medical treatment to around 12 lakh patients in remote locations across the nation. Indian Railways to Upgrade Entire Signalling System with Anti-Train Collision System: Rail Board Chairman.

The LifeLine Express started on 16 July 1991. It was a collaboration between the Impact India Foundation (IIF), Indian Railways (IR) and the Health Ministry.  The train is a unique of delivering health services to masses, especially the under-privileged.

The Express train chugs all over rural India as a part of free medical treatment to the poor. The initiative has been undertaken in association with the Health Ministry and the Indian Railways along with co- funding by Impact UK.

According to reports, each coach of the train is is air-conditioned and has one surgical operation theatre with three operating tables. It also has a sterilizing room, several patient wards, on-board power generators, a pantry car, storage for medical supplies, and accommodation for medical staff.

The main aim of the Lifeline Express is to provide on-the-spot diagnostic, medical and advanced surgical treatment for preventive and curative interventions for disabled adults and children. It is an outreach program for inaccessible rural areas where medical services are not available, traveling via Indian Railways.