Lingerie on Mannequins Not Indecent in a City Like Mumbai, Says BMC 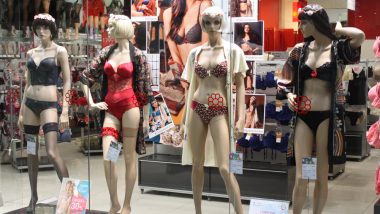 Mumbai, February 21: Brihanmumbai Municipal Corporation (BMC), the governing civic body of Mumbai has said that it is not indecent to display lingerie on mannequins in shops. Reports inform that the BMC, in its reply, said that in Mumbai, which is an international city where swimming contests and beauty pageants are held, the display of lingerie in shop windows doesn’t come across as indecent. According to a report by TOI, the statement by BMC comes almost six years after former corporator Ritu Tawade proposed a ban on lingerie mannequins. BMC Budget 2019-20 Highlights.

The reports stated that the BMC said it had no powers under the Mumbai Municipal Corporation (MMC) Act 1888 to take action against shops displaying lingerie in shops. However, the reply is to be discussed in the upcoming law committee meeting of the BMC. The reports stated that the BMC has sought directions from the state government as an authorised government gazetted officer can take action under the Indecent Representation of Women (Prohibition) Act, 1986.

The TOI report further added saying that Tawade, who is a former BJP corporator from Ghatkopar, has sought the ban on the display of lingerie mannequins. Tawade is of the opinion that the lingerie mannequins display a woman's body only for ‘advertising’ and unnecessarily attract male attention.

Confirming the report, Superintendent of licence department Sharad Bande said the BMC had sent nine letters to the government. Bande added saying that the issue has been repeatedly discussed in the civic law committee an said that they always took action against mannequins on footpaths or encroaching on road space. On the contrary, Congress corporator Tulip Miranda, a member of the law committee was quoted by TOI saying that such mannequins were objectionable as our society set-up is not yet ready for these things.

(The above story first appeared on LatestLY on Feb 21, 2019 01:31 PM IST. For more news and updates on politics, world, sports, entertainment and lifestyle, log on to our website latestly.com).