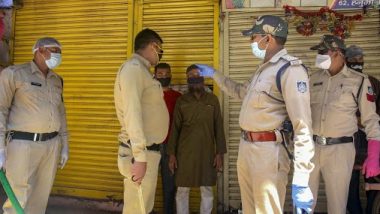 Earlier on Thursday, two girls, ventured into Pench river in Chhindwara  district to take a selfie. According to the video that went viral, the girls were seen standing on a rock on the river bed, with water gushing from one side. The girls were rescued by police, district administration and local people in the district.

This comes after police had to rescue 2 girls in Chindwara, who got stuck in Pench river while taking selfies.

According to reports, the two girls were from a group of six girls, who had gone out for a picnic on the banks of Pench river near Belkhedi village on Thursday. The two girls,  both students of Grade XI – wanted to click a selfie and went into the middle of the river, risking their lives.

(The above story first appeared on LatestLY on Jul 27, 2020 06:41 PM IST. For more news and updates on politics, world, sports, entertainment and lifestyle, log on to our website latestly.com).