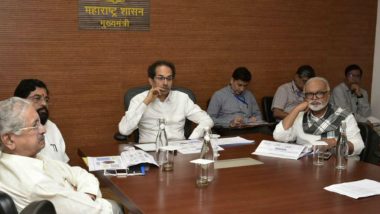 Mumbai, December 11: The Maharashtra government on Friday issued a dress code for its employees. According to the new orders, employees of the Maharashtra government cannot wear t-shirts and jeans in the state secretariat and government offices. They have been asked to wear "appropriate" formal dresses while reporting to duty. Air India Issues 'Dress Code' For Employees, Bans Ripped Jeans, T-Shirts, Shorts And Flip Flops.

"Maharashtra Government asks State Government employees and contractual staff to not wear jeans or t-shirt in the Secretariat and Government offices; instructs them to wear appropriate formal clothes, to appear professional," read the order. Several state governments had in past issued similar diktat asking their employees to shun jeans, t-shirts and in some cases skirts. Kashi Vishwanath Temple in Varanasi Imposes Dress Code on Devotees, Bans T-Shirts And Jeans Inside Sanctum Sanctorum.

Last year, the Bihar government banned casual dresses for employees, saying "it is against the office culture and office decorum". The Rajasthan government had in June 2018, banned its employees from wearing jeans and t-shirts. Employees of the Tamil Nadu government had been asked to wear clothes that reflect Indian and Tamil culture.

"Women will have to wear sari/salwar kameez/churidaar with dupatta while they are on government duty, men will have wear shirts with formal pants/veshti (dhoti) or any other Indian traditional dress," the state government had said. In 2018, the Karnataka government prohibited female employees from wearing skirts, t-shirts and pants and banned t-shirts for male workers.

(The above story first appeared on LatestLY on Dec 11, 2020 06:06 PM IST. For more news and updates on politics, world, sports, entertainment and lifestyle, log on to our website latestly.com).