Maharashtra Shocker: 32-Year-Old Man Stabs Girlfriend After She Refuses to Elope With Him in Bhiwandi; Arrested

A 32-year-old man has been arrested for allegedly stabbing and injuring his girlfriend, after she refused to elope with him, in Bhiwandi town of Maharashtra's Thane district, police said on Friday 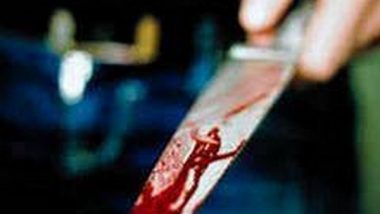 Thane, June 25: A 32-year-old man has been arrested for allegedly stabbing and injuring his girlfriend, after she refused to elope with him, in Bhiwandi town of Maharashtra's Thane district, police said on Friday.

According to mid-day, the incident took place around 7.30 am on June 23, when the accused Rajesh Bharti accosted the 30-year-old woman who was on her way to work and attacked her with a knife, mid-day reported. In the incident the woman serious sustained injuries, the station house officer of Bhiwandi police station revealed.

A case under section 307 (attempt to murder) and other relevant provisions of the IPC has been registered against the accused, the official said, adding that further probe is underway. Hyderabad Shocker: 28-Year-Old Murders Girlfriend After Families Disapprove Their Decision To Get Married; Surrenders

In another news, a 42-year-old woman was allegedly killed by her two sons aged 25 and 15 and and the elder brother's girlfriend in Wadala area on Saturday. The Wadala police have successfully nabbed all the three accused within 24 hours of the incident. Mumbai Shocker: Brothers Kill Mother for Doing Black Magic, Refusing to Allow Son to Marry His Lover; Arrested

Police said, during questioning, the accused confessed that they killed the deceased, Nirmala Vijay Thakur, for allegedly practising black magic and not allowing her elder son, Akshay to get married to his girlfriend, Komal Boilkar, 22.

(The above story first appeared on LatestLY on Jun 25, 2022 04:41 PM IST. For more news and updates on politics, world, sports, entertainment and lifestyle, log on to our website latestly.com).