Incidentally, the action against Brinda comes days after she accused Chief Minister N Birendra Singh of shielding an ex-BJP functionary in a drug smuggling case. The startling allegation was levelled by her while submitting an affidavit in a contempt of court case. 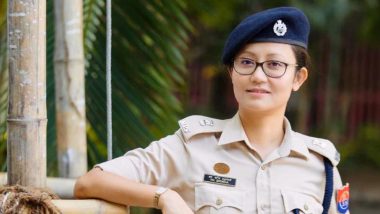 Imphal, July 30: Manipur Police Officer Thounaojam Brinda was detained by cops in Imphal West region on allegations of violating the lockdown imposed in the city. She, along with two others, was taken into custody on the night of July 27 for allegedly flouting the restrictions imposed to contain coronavirus, reports said on Thursday.

On July 28, Brinda had posted an update on Facebook to confirm that she was detained by the police. The officer claimed that her husband had arrived at the police station and was ready to pay the fine for their alleged offence but the cops refused. Former Manipur CM Summoned by CBI in Rs 332 Crore Misappropriation Case.

"Me, Sonia Phairembam and Tenao have been detained since 12.40 am at Kwakeithel FCI Crossing by Imphal West Police on charge of violating curfew according to a report from Kakching Control Room. My husband agreed to pay fine for curfew violation and let us women off as it is night but they have refused. Police are saying Lamphel Police is coming to arrest me. We are completely surrounded by armed policemen in uniform," she had posted.

Incidentally, the action against Brinda comes days after she accused Chief Minister N Biren Singh of shielding an ex-BJP functionary in a drug smuggling case. The startling allegation was levelled by her while submitting an affidavit in a contempt of court case.

The officer was pressed with the contempt charges after she had, on Facebook, questioned the special court which granted bail to the accused former BJP party worker. Brinda was also accused of showing her middle finger to the judge. The charge has been categorically denied by her in the affidavit.

(The above story first appeared on LatestLY on Jul 30, 2020 11:20 PM IST. For more news and updates on politics, world, sports, entertainment and lifestyle, log on to our website latestly.com).