Six workers in died in Sriperumbudur of Tamil Nadu after inhaling poisonous methane gas while engaged in manual scavenging at a private apartment. 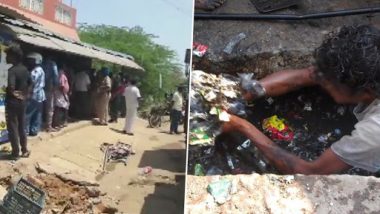 Image from the scene and a representative image of manual scavenging. (Photo Credit: ANI/PTI)

According to reports, these six workers lost their lives after inhaling poisonous methane gases while cleaning a septic tank in a private apartment at Nemili. The locals say that these workers went inside a septic tank without any safety equipment. Varanasi Shocker: Two Sanitation Workers Die of Suffocation While Cleaning Manhole in PM Narendra Modi’s Lok Sabha Constituency.

Eyewitness say that while four people, who entered the tank first, died after inhaling the toxic gas, two others, who went in to save them, also met with the same fate. Also, three of the deceased were said to be members of the same family. They were engaged by the building owner Krishnamurthy and police are looking for that person.

Taking cognisance of the incident, police are investigating the case and looking for the people who have hired them for cleaning the septic tank and allowed them to enter the tank without any safety gear. It is to be known that manual scavenging has been long banned in the country, while incidents like these continue to happen in Tamil Nadu.

The shocking incident reminds of the previous case in Uttar Pradesh, where two sanitation workers – who were cleaning a blocked sewage line – died in Varanasi on March 3. Both the workers were called to clear a blocked pipe at a sewage treatment plant in Varanasi's Pandeypur area and had gone down a four-feet deep manhole when the ground caved in.

With mounds of construction debris were lying very close to the manhole, where these two sanitation workers were cleaning the blocked pipe, these workers died of suffocation. When the police could trace the two men, National Disaster Relief Force (NDRF) teams were called for the rescue operations, but only after six hours took out their dead bodies.

(The above story first appeared on LatestLY on Mar 26, 2019 05:27 PM IST. For more news and updates on politics, world, sports, entertainment and lifestyle, log on to our website latestly.com).