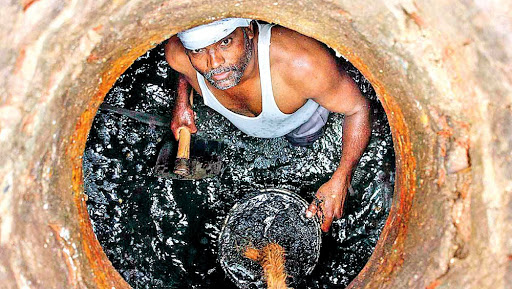 Varanasi, March 3: In a sad incident, two sanitation workers – who were cleaning a blocked sewage line – died in Varanasi on Friday. The incident comes two days after Prime Minister Narendra Modi surprised people by washing the feet of sanitation workers during his visit to the Kumbh in Prayagraj. Reports say the two men have been identified as Rajesh Paswan and Chandan – both in their twenties.

According to the incident, both the workers were called to clear a blocked pipe at a sewage treatment plant in Varanasi's Pandeypur area. To clean the blocked pipe, they had gone down a four-feet deep manhole when the ground caved in. It is said by the eyewitnesses that mounds of construction debris were lying very close to the manhole, where these two sanitation workers were cleaning the blocked pipe. Kumbh Mela 2019: 10,000 Sanitation Workers Set Guinness World Record by Gathering for 3-Minute Cleaning Drive.

When the police could trace the two men, National Disaster Relief Force (NDRF) teams were called for the rescue operations, but only after six hours took out their dead bodies.

With the bodies taken out by the NDRF personnel from the manhole, local people alleged complete negligence on the part of the authorities and staged their protest. They even alleged that no one bothered to clean the debris in the area, which was accumulating for a while. The police have started their investigation in the matter.