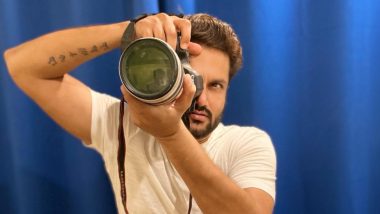 An entrepreneur, a passionate professional photographer, Hitesh Patel is all set to bring his first debut film, 'Neighbours'. Interestingly though Patel comes from Gujarati background, he has still opted to produce his first film in Marathi. Hitesh intends to back meaningful content and good cinema.

Ace photographer turned film producer Hitesh Patel, whose admiration towards photography has actually inspired and driven him into filmmaking. He is now moving big-time into the movie-making business. Debutant filmmaker has made three short films before producing his debut Marathi film ‘Neighbours’.

Hitesh elaborates, “I met Vinay Gholap, writer-director of Neighbors, while making one of my short films. He narrated me his script. I liked it and thought of producing it. Also now OTT platforms have changed the game. I think now there is no barrier for language and what matters is good content and the scale at which it is made and released.”

He adds, “I have studied in Pune and have spent a lot of time in Mumbai. I've a lot of Maharashtrian friends and I am well-versed with Marathi. So why not make a film in Marathi. With my production house 'Kalpana Rolling Pictures Productions', I am going to back good and meaningful cinemas like 'Neighbours' that can been enjoyed by both the young as well the family.”

Hitesh reveals, traveling is his prime hobby. He is an ardent traveller. He would click photographs throughout his trips and those were the moments he fell in love with photography. During his higher studies in Pune he began learning photography side by side. It was inevitable, that his artistic and professional side would mix into one. And that eventually inspired him to venture into filmmaking.

He says, Photography and filmmaking both have one thing in common; that is, both tell stories. He feels turning into a filmmaker, has only changed the medium to express.

He shares a beautiful memory of how he got his first camera. His parents introduced him to the world of photography by gifting him a camera on his birthday. Then, he knew nothing about camera, lenses and its technicalities but was just happy clicking. That medium became his way to express himself.

Time will reveal whether this aspiring filmmaker will make his way to Marathi hearts. Till then we wish him best luck and welcome him to film industry.